Shipping Routes (with labels) - One Year 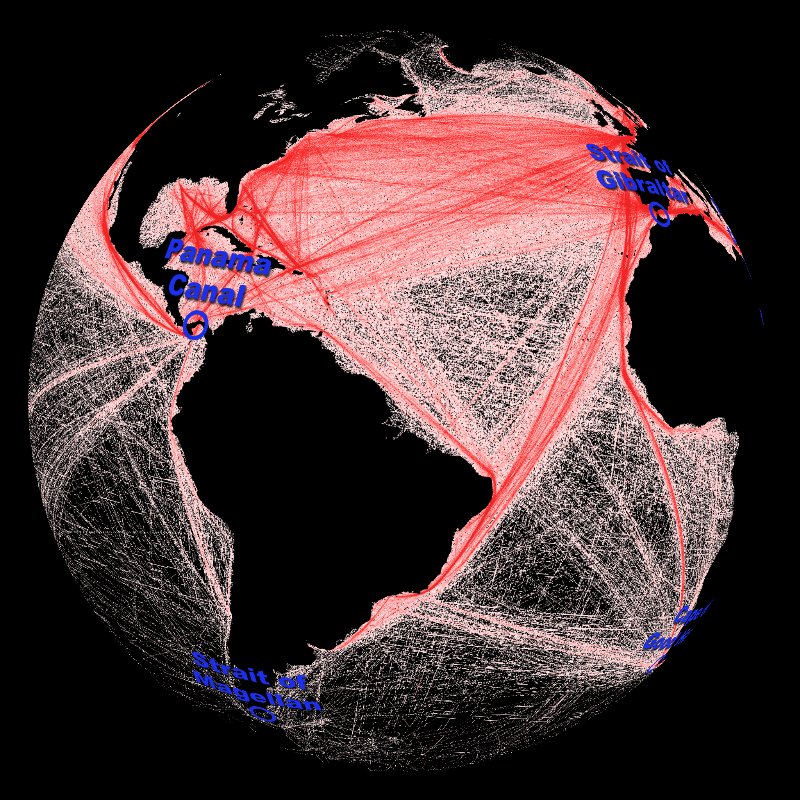 There were more than 30,000 merchant ships greater than 1000 gross tonnage at sea in 2005. The World Meteorological Organization has a Voluntary Observing Ships Scheme that equips ships with weather instruments in order to provide observations for weather models and forecasters. In addition to observing the weather, the location of the ships is also recorded through GPS. From October 2004 through October of 2005 1,189,127 mobile ship data points were collected from 3,374 commercial and research vessels, which is about 11% of all ships at sea in 2005. By connecting the data points for each vessel, shipping routes over the course of one year were plotted. The National Center for Ecological Analysis and Synthesis compiled this data to include in their Global Map of Human Impacts to Marine Ecosystems.

As seen in this dataset, there are several very popular shipping routes around the world. The density of ship tracks in any location ranges from 0 to 1,158 on this map, showing relative density (in color) against a black background with scale of 1 km. Some of the most populated shipping routes cross through the Panama Canal, the Suez Canal, the Strait of Malacca , and the Strait of Gibraltar. Because only 11% of ships are represented in this dataset, the density of ship traffic is not fully portrayed and is biased to the types of ships that volunteered for the program. The map creators suggest that the high traffic locations may be strongly underestimated. In spite of this, there are enough data points to highlight some of the busiest shipping routes. There is also a version of this dataset with the major canals and straits labeled.