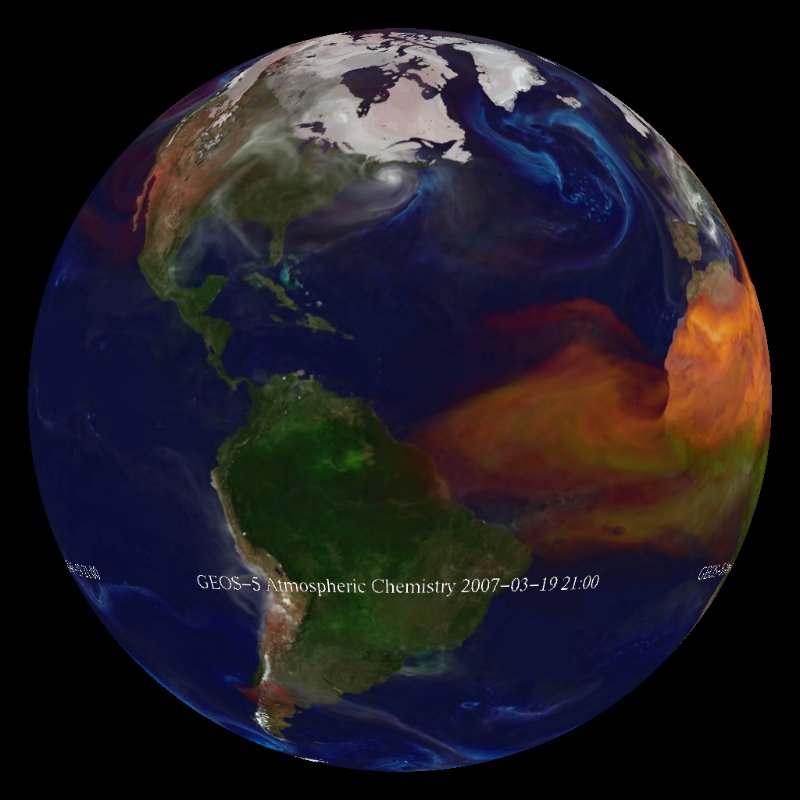 Models create a dynamic portrait of the Earth through numerical experiments that simulate our current knowledge of the dynamical and physical processes governing weather and climate variability. The simulation visualized here captures how winds lift up aerosols from the Earth’s surface and transport them around the globe during the period September 1, 2006 to March 17, 2007. Such simulations allow scientists to identify the sources and pathways of these tiny particulates that influence weather and climate.

With a resolution of 10 kilometers per grid cell, the simulation represents a variety of features worldwide. Dust (red) blows over the Saharan desert and interacts with two Atlantic tropical cyclones. Sea salt (blue) churned up from the ocean by surface winds is most prevalent along mid-latitude storm tracks and fronts in the Southern Ocean and within tropical cyclones. Organic and black carbon (green) burst from extensive biomass burning in South America and Africa. Sulfate (white) arises from three primary sources: fossil fuel emissions over Asia, Europe, and the United States; a persistently active volcano in Mozambique, Africa; and a large eruption from the Karthala Volcano on Grande Comore Island, Comoros, in January 2007.

The simulation used the Goddard Earth Observing System Model, Version 5 (GEOS-5) and the Goddard Chemistry Aerosol Radiation and Transport (GOCART) Model. It ran on 3,750 processors of the Discover supercomputer at the NASA Center for Climate Simulation.