Typhoon Haiyan, also known in the Phillippines as Typhoon Yolanda, may be the strongest recorded tropical cyclone to make landfall with sustained speeds up to 195 mph. If confirmed, it would beat the previous record holder, Hurricane Camille (1969). This dataset is taken from the Real-Time Linear IR satellite dataset from October 30th to November 12th, 2013.

The thirteenth named storm of the season, the system originated from an area of low pressure several hundred kilometers east-southeast of Micronesia on November 2nd. Tracking westward, it formed as a tropical depression the following day. Once receiving its name on November 4th it began a period of rapid intensification that brought it to typhoon intensity on November 5th. On November 6th, the Joint Typhoon Warning Center designated it as a Category 5-equivalent super typhoon on the Saffir-Simpson hurricane wind scale and it passed over the island of Kayangel in Palau shortly after.

Haiyan continued to intensify and on November 7th the Japan Meteorological Agency estimated the system's one-minute sustained winds were 315 km/hr (195 mph). Several hours later, the eye of the cyclone made it's first landfall in the Philippines at Guiuan, Eastern Samar without losing any intensity. Gradually weakening, the storm made five additional landfalls in the country before emerging over the South China Sea.

A layer called Typhoon Track is built-in to this dataset, which can be toggled on using the layer tab in the iPad Remote App 4.0+. The colors represent the intensity, red is the highest (category 5-equivalent) and white is the lowest (tropical storm). 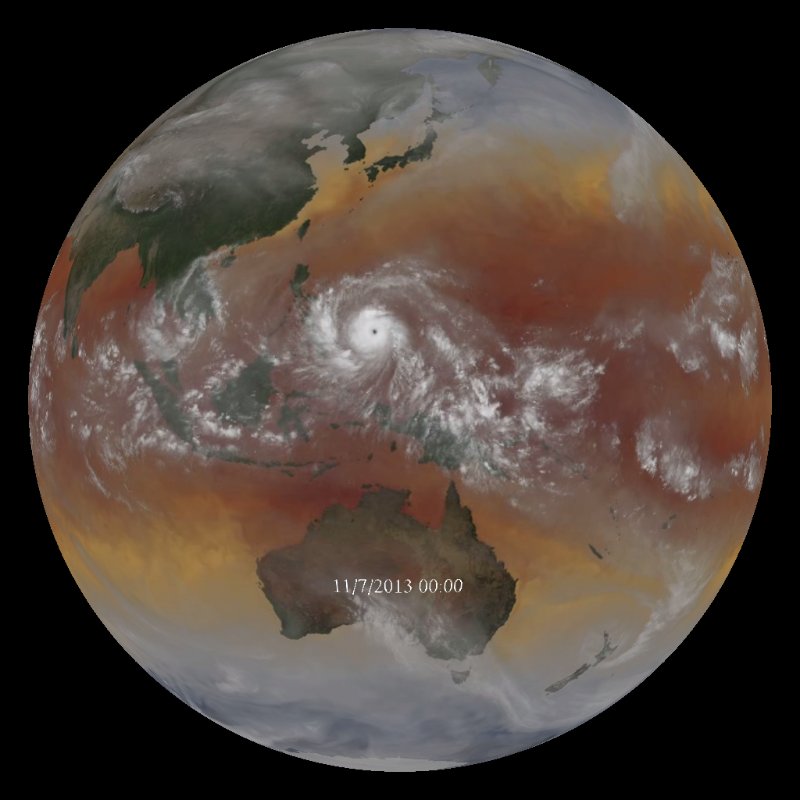