Permalink to Description
Earthquakes, landslides, volcanoes, explosions, and atmospheric processes - all of these disasters have caused tsunamis in the past. But by far, the most common generator of tsunamis is earthquakes, as has recently been seen in Sumatra, Chile, and Japan. The NOAA National Geophysical Data Center archives academic and historical reports from around the world of where tsunamis are estimated to have originated, and have compiled a database of over 2,500 events from 2,000 B.C. through 2014t. This image plots about half of those events - tsunamis that are classified as a "definite tsunami" or "probable tsunami." The icons are shaded according to the devastation of the event by the number of fatalities caused where white = none, yellow = 1-50, orange = 51-100, and red = >101. Since earthquakes are the most common tsunami generator, the highest density of event origins are located around the Pacific "Ring of Fire" known for its prevalence of volcanic and tectonic activity. The points are overlaid on top of a map of ocean bathymetry (Natural Earth 2 from the Natural Earth project), which indicates many of the pronounced ocean features, such as volcanic islands, rift zones, and plate boundaries that are often associated with generating tsunamis.

It should be noted that it is often difficult to validate the exact origin or cause of many ancient tsunamis, especially with the accuracy that is available with today's monitoring equipment. As a result, some tsunami origins seem landlocked. Many are due to coarse estimates of where a tsunami may have originated, or are associated with the closest city that recorded an event. Other tsunami datasets available for SOS include 2004 Indian Ocean Tsunami and 2011 Japan Tsunami. 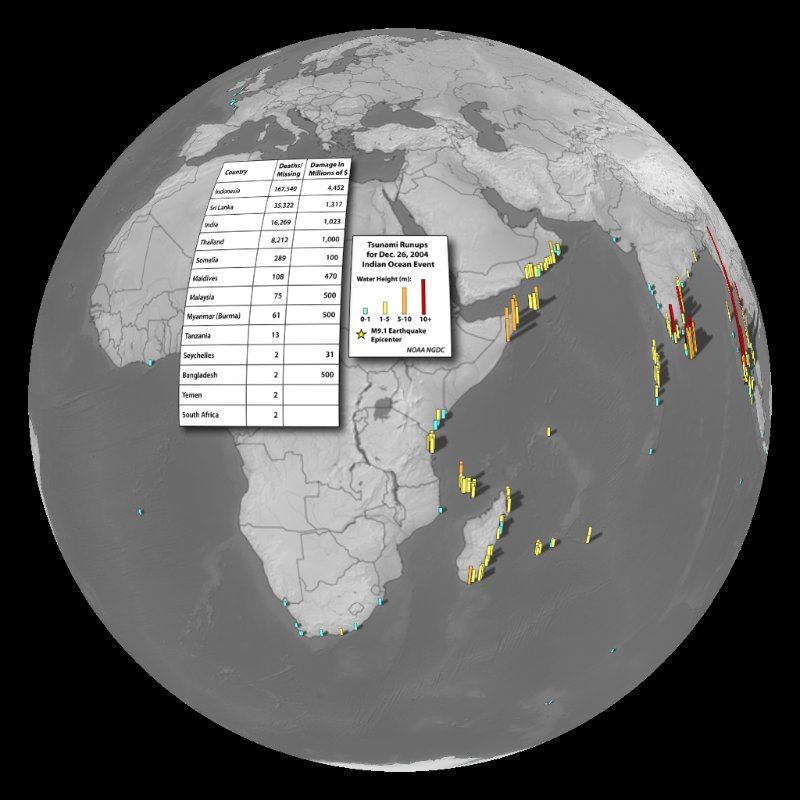