Satellites are important to scientists because the instruments on board can provide almost daily global coverage of the Earth that would otherwise not be available. There are six instruments on board NASA's Aqua satellite. One of them is MODIS, the Moderate Resolution Imaging Spectroradiometer. MODIS measures 36 spectral frequencies of light, which provide a wealth of information about the physical properties of the atmosphere and the biological and physical properties of the oceans and land. The Aqua satellite with MODIS attached was launched May 4, 2002. Since then, Aqua has been circling the Earth at an altitude of 438 miles (705 kilometers) every 99 minutes in a polar orbit passing within 10 degrees of each pole every orbit. The orbit is sun-synchronous, which means that the satellite passes over the same spot of the Earth at about the same local time everyday. Aqua crosses the equator from south to north at about 1:30 pm local time.

This dataset shows the path of the Aqua satellite and MODIS swath over a period of one day, August 27, 2005. The swath of data collected by MODIS is over 1400 miles (2300km) wide. This means that MODIS is able to measure almost the entire Earth surface everyday. MODIS only collects data when it is on the sunlit side of the Earth because it measures reflected light from the Sun. The bright band that appears in the middle of some of the swaths is reflected sunlight off of the ocean. By August 27, 2005 Hurricane Katrina had crossed Florida and was strengthening in the Gulf of Mexico. That hurricane, as well as Typhoon Talim in the western Pacific between Japan and New Guinea, is visible in this dataset. 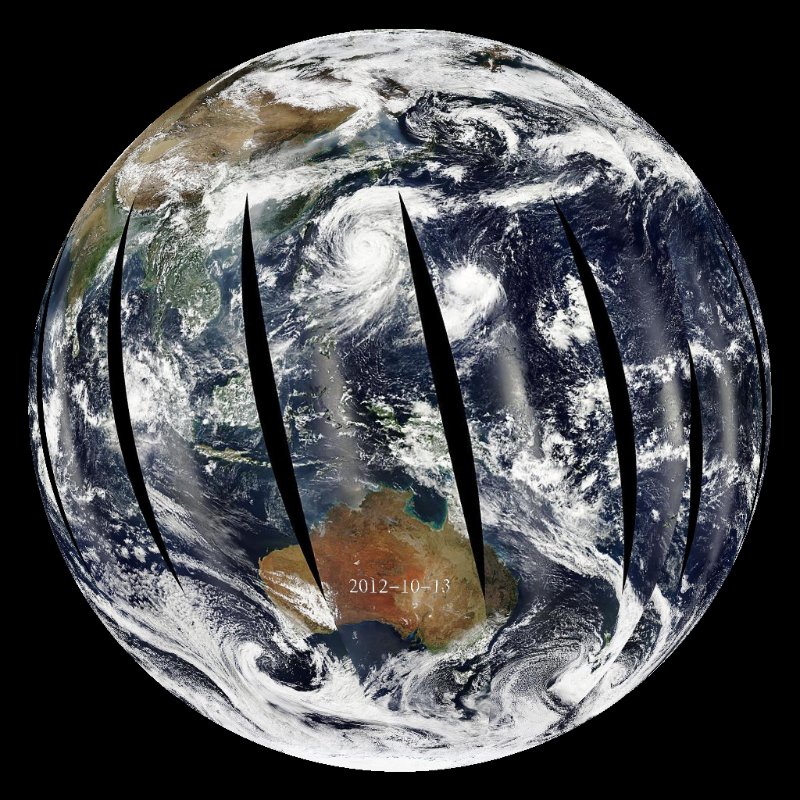