"Malaria is a mosquito-borne disease caused by a parasite. People with malaria often experience flu-like symptoms including fever and chills. In 2010 an estimated 219 million cases worldwide," according to the CDC. Furthermore, 91% of the deadly cases of malaria occurred in Africa.

"The Malaria Atlas Project brings together researchers based around the world with expertise in a wide range of disciplines from public health to mathematics, geography and epidemiology. We work together to generate new and innovative methods of mapping malaria risk. Ultimately our goal is to produce a comprehensive range of maps and estimates that will support effective planning of malaria control at national and international scales".

This map illustrates "the estimated proportion of 2-10 year olds in the general population that are infected with P. falciparum at any one time, averaged over the 12 months of 2010." For example if a region has a 20% probability indicated this means that there is a 20% chance that a 2-10 year old within this 1 km squared region has contracted malaria within the year 2010. Within the stable transmission regions, the occurrence rate is from 0-70% of the population. Falciparum is one of 5 types of human transferable malaria and is the most severe in its symptoms. This estimate was developed by parasite rate surveys which are framed within a geo-statistical model. Because reported rates of malaria are different from actual occurrence, environmental covariates are used to establish estimates. These covariates include rainfall, temperature, land cover, and urban vs. rural status. For more information on the Malaria Atlas Project, please visit the MAP website. 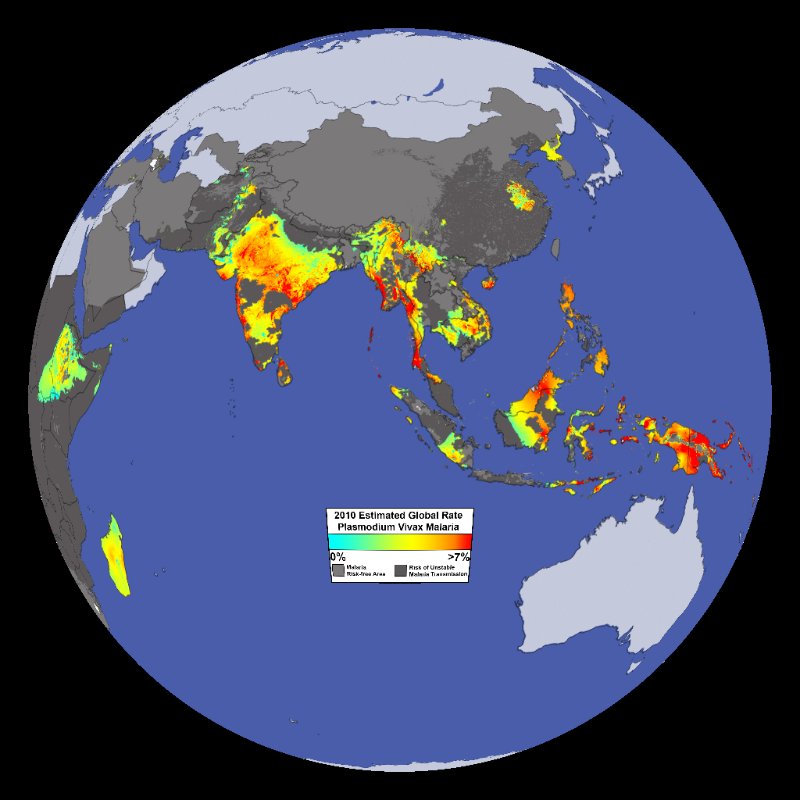