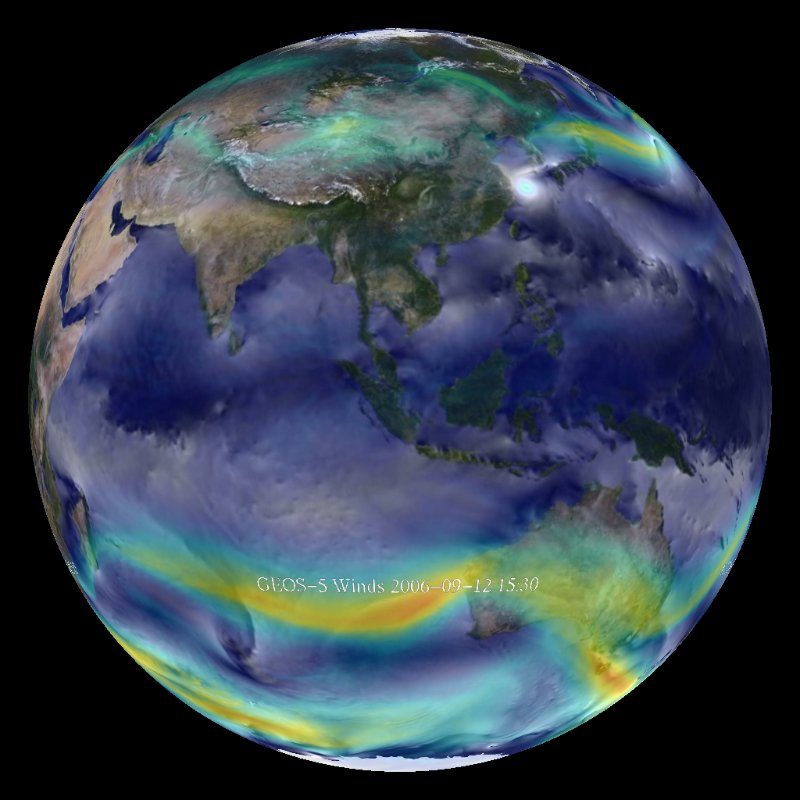 Models create a dynamic portrait of the Earth through numerical experiments that simulate our current knowledge of the dynamical and physical processes governing weather and climate variability. The simulation visualized here captures the speed of winds at the tropopause, about 6-9 miles above the Earth’s surface during the period September 1, 2006 to March 17, 2007. Such simulations allow scientists to view the intensity and turbulence of the polar and sub-tropic jet streams, which carry weather around the globe. Red, orange and yellow are used for the fastest moving air.

Jet streams are the major means of transport for weather systems. A jet stream is an area of strong winds ranging from 120-250 mph that can be thousands of miles long, a couple of hundred miles across and a few miles deep. Jet streams usually sit at the boundary between the troposphere and the stratosphere at a level called the tropopause. This means most jet streams are about 6-9 miles off the ground.

The higher latitude polar jet stream tends to be stronger than it's lower latitude subtropical jet stream neighbor. During the winter months, the northern hemispheric polar jet moves equatorially bringing polar cold fronts to lower latitudes. During the summer as the cold air retreats, it moves poleward. In this dataset, you can start to see the northern polar jet plunging down deeper into the U.S. The Antarctic Polar Vortex encircles the southernmost continent completely and acts as a buffer against warm air.