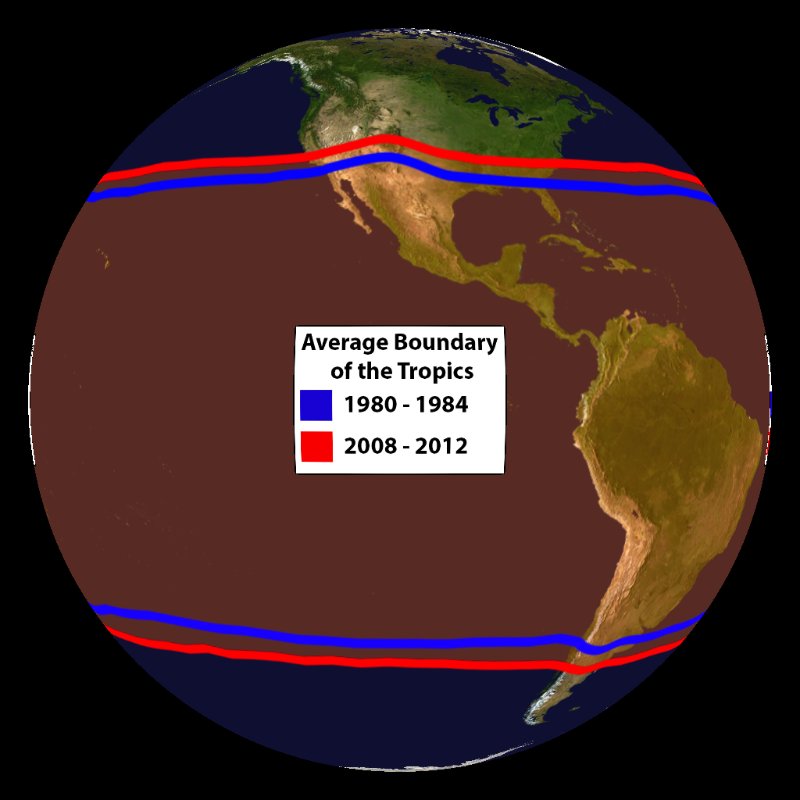 This dataset was developed as part of the EarthNow project, and shows the changes in the tropical zone boundaries over the last three decades.

The tropics are defined by a number of different factors including latitude, precipitation, and wind. The easterly winds are one way to define the tropics and the global atmospheric circulations that influence those winds also influence the concentration of total column ozone. In this dataset, the easterly winds and are indicated in orange. They are the central belt of the world that is traditionally defined by a warm moist climate. In order to define the boundary of the tropics, satellites are used to measure the total column ozone differences between the tropics and the subtropics. The highest levels of ozone are found in the stratosphere, the second layer of the atmosphere. In the tropics, the tropopause, the boundary between the first two layers of the atmosphere, is higher causing the stratosphere to be thinner and therefore less ozone is found in the total column. Ozone is produced in the tropics by convective weather and abundant sunlight (the energy that is required to split O2 molecules to form ozone, O3) and transported to the polar regions, where it pools and sinks as the tropopause falls to a lower altitude.

This expansion is significant, as it spreads the threat of tropical diseases as well as drought areas within the subtropics. This is even more important as this region of the world is home to most of the Earth's human inhabitants. Due to this shift, increased drought is forecasted for much of the world including southwestern United States, the Middle East, and southern Australia. These changes will also spread tropical diseases such as dengue fever and others, as there have been recent outbreaks in Florida, Portugal, and Russia. Understanding these changes in climate boundaries will offer great insight into the best ways to face these new conditions including vaccinations, food production, and urban development.