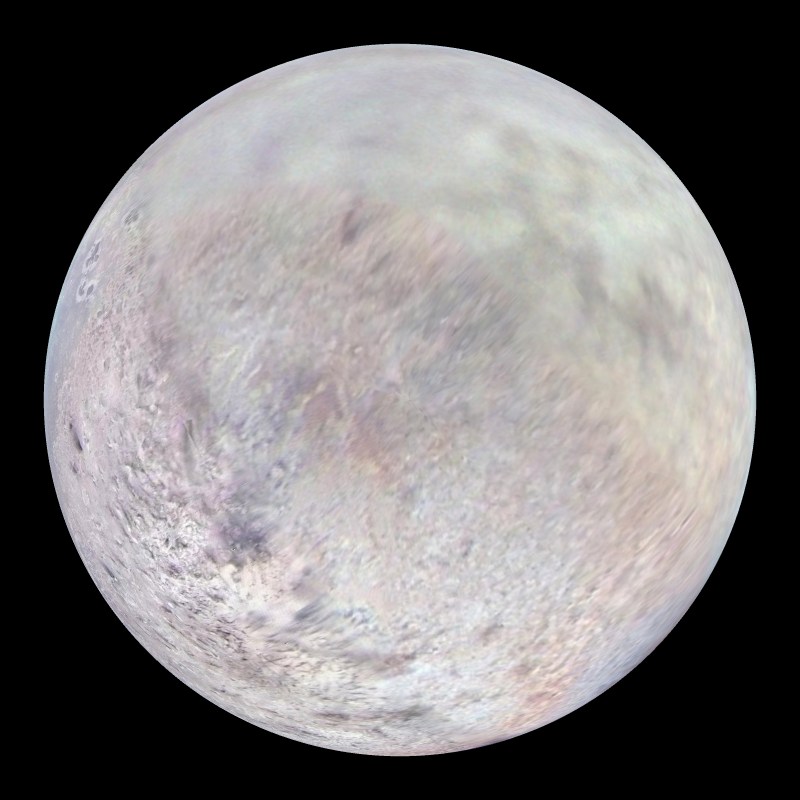 Triton is the biggest of Neptune’s thirteen known moons. This moon is suspected to have been captured by Neptune, which would explain its highly unusual orbit and rotation. One of the only bodies in the solar system to have a retrograde orbit, Triton also rotates at an angle of 157° to the axis of Neptune’s rotation. This means that the poles and equator alternately face the sun during rotation, most likely causing dramatic changes in seasons. When the Voyager 2 flew by in 1989, Triton’s South Pole was facing the sun. An ice cap of frozen nitrogen and methane was found on Triton’s South Pole when Voyager 2 visited.

There are extensive systems of ridges and valleys covering the young, relatively crater-free surface of Triton. This is thought to be the result of freezing and thawing cycles. Triton’s temperature, similar to that of Pluto, is -391&#176F. At this temperature, methane, nitrogen, and carbon dioxide all freeze solid. One reason for this incredibly cold temperature is the high albedo of the moon. With an albedo of .7-.8, most of the scarce sunlight that makes it to the surface of Triton is reflected. Probably the most interesting feature on Triton is the active ice volcanoes that were observed by the Voyager 2. One of the plumes was measured to be over five miles high. The volcanoes are thought to be caused by liquid nitrogen, dust or methane compounds from the center of the moon. It has also been discovered that Triton has a very thin atmosphere that is growing warmer for reasons unknown to scientists.