Topography and Bathymetry with Nighttime Lights 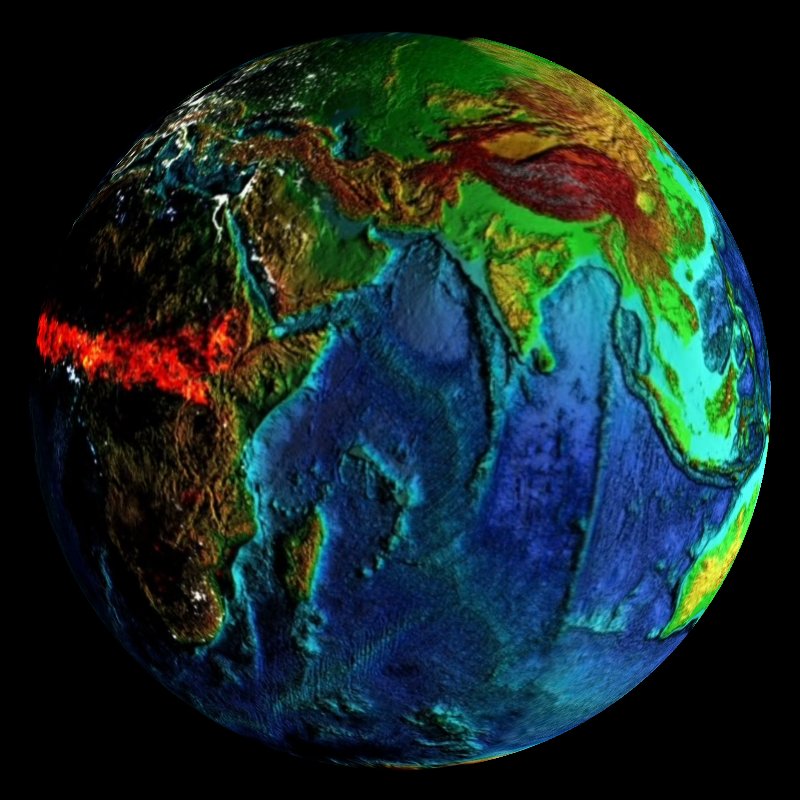 This planet Earth visualization shows a rotating planet in order to display both a nighttime and daytime view. The daytime side of the visualization shows the bathymetry and topography of the globe. Color coding is used to distinguish between the elevations. Red and gray represent the highest terrain on the land, green and yellow represent the lowest. In the ocean, the darker colors are the deeper ocean floors while the lighter colors indicate shallower areas as well as mountain ranges on the sea floor. The very light blue shading in the ocean, near the land forms, is generally the shallow continental shelf. Some interesting features that can be seen are the mountain ranges in the oceans, such as the mid-Atlantic Ridge in the middle of the Atlantic Ocean, which is spreading. Also in the ocean is the Marianas Trench, which is south of Japan. This trench is the deepest location in the ocean with an amazing depth of 36,201 feet, almost 7 miles. On land, the Himalayas are a noteworthy feature, as they are the home of Mount Everest, the tallest point on earth at a height of 29,035 feet, almost 5.5 miles.

The nighttime side of this visualization shows lights of the world over a one-year period. The white represents lights generated from electricity, the orange shading shows fires, the green shading indicates light from squid fishing boats, and the blue spots are gas flares from oil rigs. Areas of high population and economic development are generally covered with white lights. Also, areas along coasts tend to be well populated. The Nile River can be easily traced from the string of lights that outline it. Major interstates in the United States can be traced out from the lights of the towns along the roads. The fishing lights are most dense near Japan. Fishermen shine bright lights into the seas to attract squid to the surface in order to catch them. The orange shading might make it seem that large portions of Africa are on fire. However, this shading depicts a composite of one year’s worth of data so the fires are not all burning at once. While some of the fires are for cooking and light, most are the result of slash and burn agriculture in the jungles.