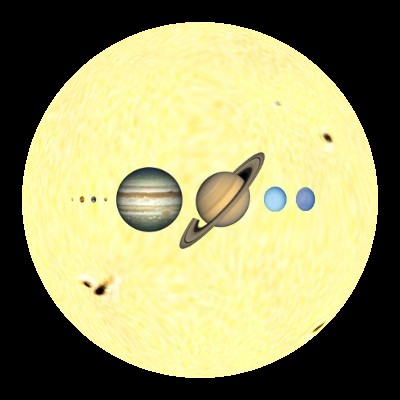 The outer planets are called gas giants because they are large and consist mainly of hydrogen and helium. The gas giants also typically have a large number of moons, while the terrestrial planets have limited moons. The first gas giant, Jupiter, is certainly a giant. The radius of Jupiter is 44,423 miles (71492 km). More than 1300 Earth's could fit inside Jupiter. The next planet past Jupiter is Saturn, the second largest planet. The radius of Saturn is 37,449 miles (60268 km). The rings of Saturn would be the width of a credit card and would extend much further than the picture shows. The edge of the brightest rings extends 75,900 miles (122,200 km) from Saturn and the faintest rings extend out 300,000 miles (483,000 km) from Saturn. The seventh planet from the sun is Uranus. Uranus ranks as the third largest planet with a radius of 15882 miles (25,559 km). Now considered the eighth and final planet in the solar system is Neptune, the fourth largest planet with a radius of 15,389 miles (24,766 km). Uranus and Neptune are very close in size. The final object in the picture is Pluto, which is now classified as a dwarf planet. Pluto only has a radius of 715 miles (1150 km). It was demoted from planet to dwarf planet in 2006 when new guidelines were created to classify planets and Pluto didn't meet all of the qualifications.