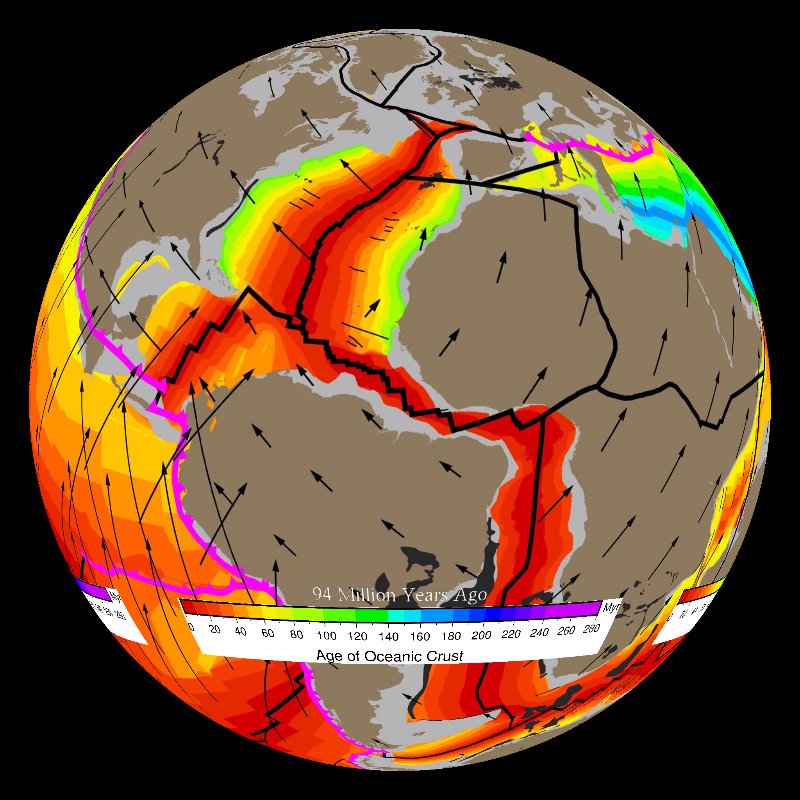 Our planet's surface has been shaped and re-shaped by plate tectonics through cycles of supercontinent amalgamation and breakup. We can study the motion of the tectonic plates, and the continents that they carry, by measuring the magnetic signatures recorded in rocks that form the seafloor. As plates move apart at mid oceanic ridges (also known as seafloor spreading centers), lava from the Earth's mantle fills the void that is being created and solidifies as basalt, which can capture the magnetic polarity of the planet at the time. As the magnetic polarity reverses irregularly over time, we can use this barcode pattern to determine the age of the oceanic crust across all the world's oceans. Teams of geologists, geophysicists and marine scientists use ocean-going scientific vessels to criss-cross the oceans in order to reveal the entire "barcode" of seafloor spreading histories. This data enables the creation of "plate tectonic reconstructions" where the seafloor spreading history can be unwound to restore the past position of continents as they are pushed and pulled by the motion of the oceanic plates.

This animation of seafloor spreading and plate tectonic evolution of the planet since 200 million years ago is created from a synthesis of marine geophysical data (namely, the magnetic anomalies) and geological data on the continents. The grey regions represent continental areas, while the light brown regions represent the reconstructed position of present-day coastlines (for reference). The rainbow coloured regions represent the age of oceanic crust through time that is modelled from magnetic anomalies collected from the ocean floor. Plate boundaries are plotted to show the evolving network of narrow deformation zones that accommodate the motion of plates - including mid oceanic ridges and transforms (black lines), and subduction zones (teethed magenta lines). Dark grey regions represent areas of volcanism (known as Large Igneous Provinces) that are related to large upwellings of hot material from mantle plumes. The animation is derived from a powerful scientific tool, forming the basis of numerical simulations of oceanic circulation, deep-time climate change, and planetary-scale geodynamic modelling of mantle convection.

The plate motion model that is visualized here is from: Gibbons, A., Zahirovic, S., Muller, R., Whittaker, J., and Yatheesh, V., 2015, A tectonic model reconciling evidence for the collisions between India, Eurasia and intra-oceanic arcs of the central-eastern Tethys: Gondwana Research FOCUS.

Read more here: A tectonic model reconciling evidence for the collisions between India, Eurasia and intra-oceanic arcs of the central-eastern Tethys