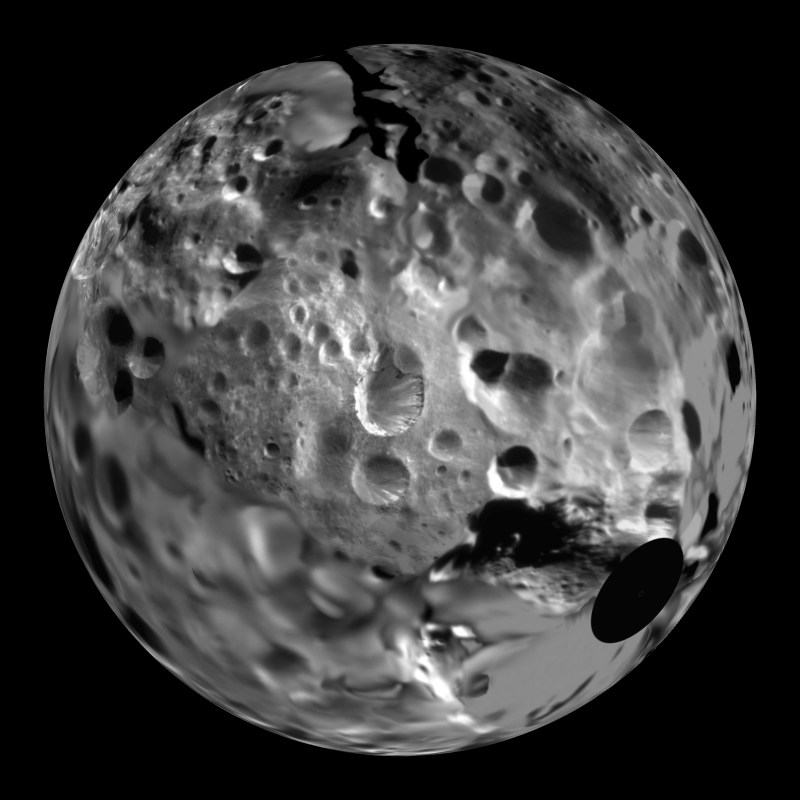 Phoebe is the first satellite to be discovered photographically. It is over eight million miles away from Saturn, over four times farther from Saturn than its nearest neighbor, the moon Iapetus. Originally thought to be a captured asteroid, Phoebe was found to contain carbon dioxide, which has never been found on an asteroid. Phoebe is now thought to be either a comet or Kuiper Belt object (an area that extends from the orbit of Neptune out to 4.7 billion miles from the sun). One reason for believing Phoebe to be a comet or Kuiper Belt object is its highly unusual orbit. While most of Saturn’s moons orbit around its equator, the plane of Phoebe’s orbit is 175° from the equator of Saturn. Also, the moon rotates retrograde.

While most of the moons of Saturn are composed mainly of ice and therefore have relatively high albedos (reflectivity), Phoebe is estimated to be composed of 50% rock and is known to have a very low albedo of .06. The dark coloring is part of the reason that it was first hypothesized that Phoebe was an asteroid. The surface of Phoebe is not only dark but also heavily scarred and cratered, with several substantial craters. Only in 2000, when several smaller new moons were discovered, was it determined that Phoebe is not the farthest moon from Saturn.