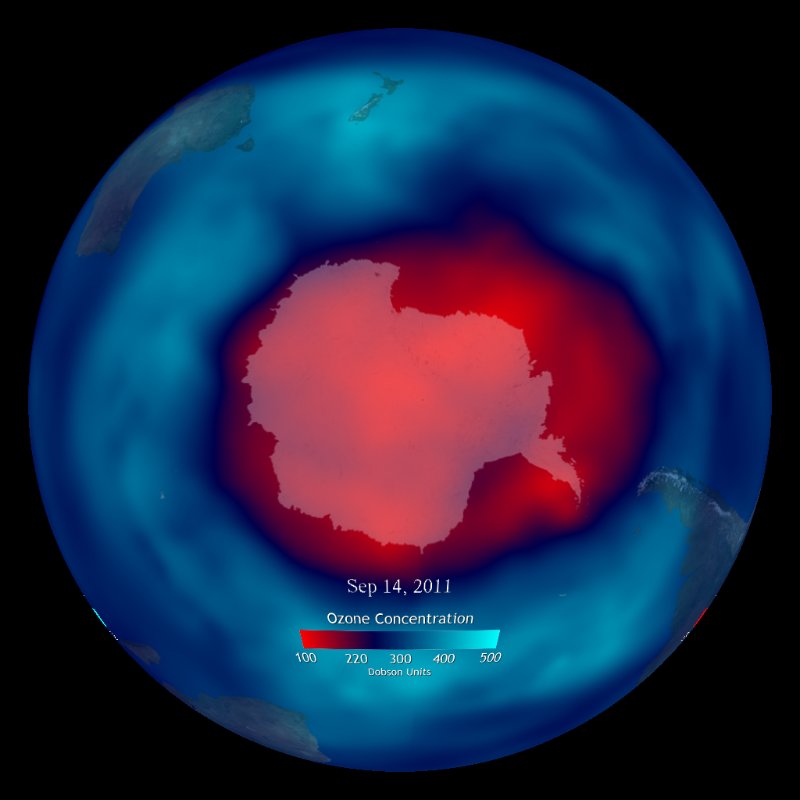 Ozone is a gas made of three oxygen atoms, and just like any other gas it circulates in the atmosphere. The stratospheric ozone layer is critical because it protects Earth from harmful ultraviolet solar radiation. Areas with ozone concentrations less than 220 Dobson Units are called "holes" in the layer. The Antarctic ozone hole is formed each year in the Southern Hemisphere spring (September-November) when there is a sharp decline (currently up to 60%) in the total ozone over most of Antarctica. During the cold dark Antarctic winter, stratospheric ice clouds (PSCs, polar stratospheric clouds) form when temperatures drop below -78C. These very cold clouds are responsible for chemical changes that promote production of chemically active chlorine and bromine. When sunlight is combined with the chlorine and bromine in the Antarctic Spring, there is an activation that leads to a rapid ozone loss, which results in the Antarctic ozone hole. Although some ozone depletion also occurs in the Arctic during the Northern Hemisphere spring (March-May), wintertime temperatures in the Arctic stratosphere are not persistently low for as many weeks which results in less ozone depletion. The production of ozone is high near the equator, but due to atmospheric circulation transporting the ozone to the poles, the equator tends to be a region of relatively low ozone through the year.

Scientific evidence, accumulated over more than two decades of study by the international research community, has shown that human-produced chemicals are responsible for the observed depletions of the ozone layer. The ozone-depleting compounds contain various combinations of the chemical elements chlorine, fluorine, bromine, carbon, and hydrogen and are often described by the general term halocarbons. Through an international agreement known as the Montreal Protocol on Substances that Deplete the Ozone Layer, governments have decided to eventually discontinue production of CFCs, halons, carbon tetrachloride, and methyl chloroform (except for a few special uses), and industry has developed more "ozone-friendly" substitutes. All other things being equal, and with adherence to the international agreements, the ozone layer is expected to recover over the next 50 years or so. NOAA's polar orbiting satellites are used to monitor the ozone hole and the data taken from the POES satellites is processed and made available on a daily basis in near real-time.