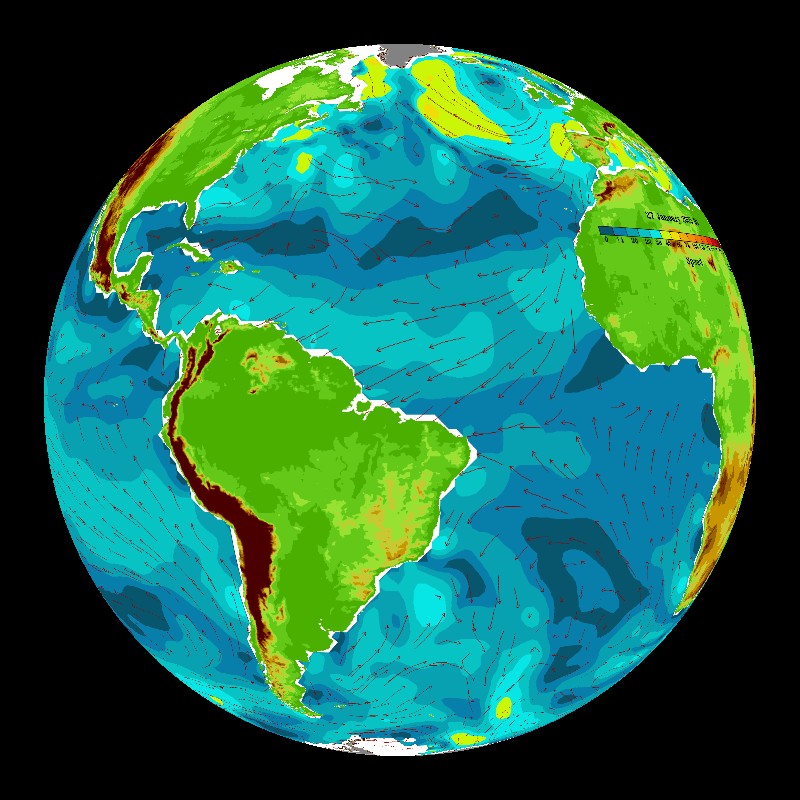 The SeaWinds scatterometer, carried aboard NASA's QuikSCAT satellite, is a microwave radar designed to measure the backscatter related to near-surface wind speed and direction over the oceans. A rougher ocean surface returns a stronger signal because the waves reflect more of the radar energy back toward the scatterometer antenna (backscatter), and a smoother ocean surface returns a weaker signal because less of the energy is reflected. Given the known relationship between the roughness of the surface and the strength of the wind, it is possible to compute the wind speed and direction - the wind vector - from multiple observations of the signal returned from a given area on the ocean surface.

Measurements of the global sea-surface wind speed and direction, observed by QuikSCAT, are important to meteorologists and oceanographers in the preparation of marine weather forecasts and the issuance of warnings for the high seas. These include forecasts of the strength and track of hurricanes and winter storms, forecasts that are important to emergency response, offshore oil production and commercial shipping. Wind information is also used in forecasts of waves and ocean currents. The measurements are also important in observing and understanding the global manifestation of phenomena like El Niño Southern Oscillation (ENSO). Winds are related to key processes in the hydrological cycle (evaporation and precipitation), to the energy cycle (through evaporation and other energy fluxes), and the CO2 budget.

NASA's QuikSCAT mission carrying the SeaWinds scatterometer was launched in June 1999 and has been operating ever since.