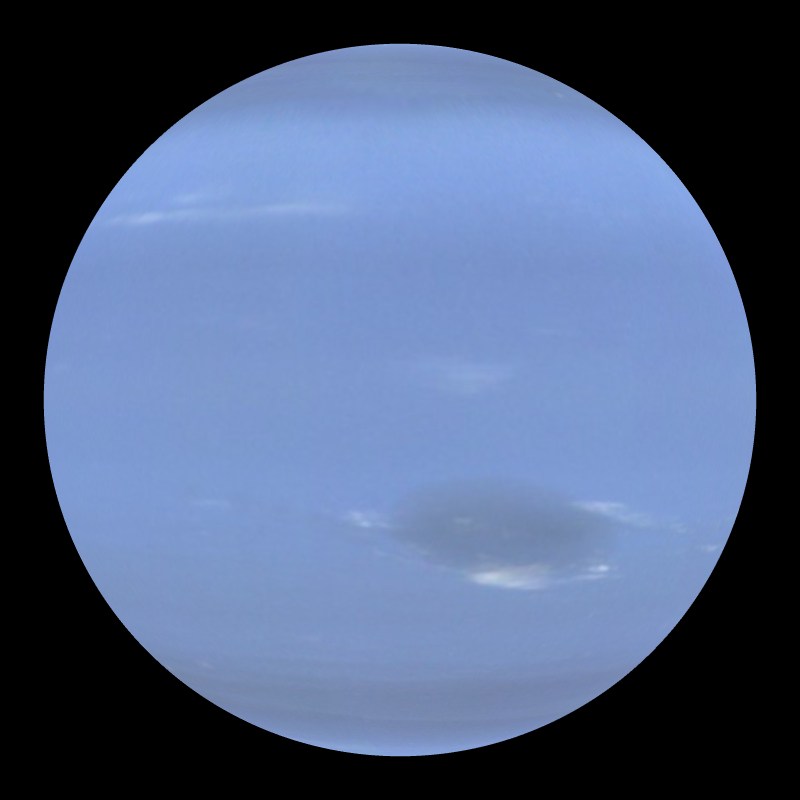 Neptune is the eighth planet in the solar system at an average distance of 2.8 billion miles from the Sun. Due to the eccentric orbit of Pluto, Neptune becomes the ninth planet for a period of 20 years every 248 Earth years. The blue coloring is the result of methane in the atmosphere, though the exact reason for the vividness of the blue is still unknown. The axis of the magnetic field and the axis of rotation are off by 47° on Neptune causing wild variations in the magnetic field, which is 27 times stronger than Earth’s. Also, six rings which appear to be young, encircle Neptune.

The winds that whip around Neptune are on average nine times faster than those on Earth and are believed to be the strongest winds in the solar system. Storms much like the Great Red Spot on Jupiter have been seen on Neptune. Unlike the Great Red Spot, which has been observed for over 300 years, the storms on Neptune seem to come and go. In 1986 the Voyager 2 discovered the Great Dark Spot, a storm in the Southern Hemisphere. However, later images from the Hubble Space Telescope show that the Great Dark Spot no longer exists and that a new storm formed in the Northern Hemisphere. Also, there is a group of white clouds referred to as The Scooter which races around the planet every 16 hours. The Scooter is thought to be a plume from lower in the atmosphere, though its true origin is unknown.