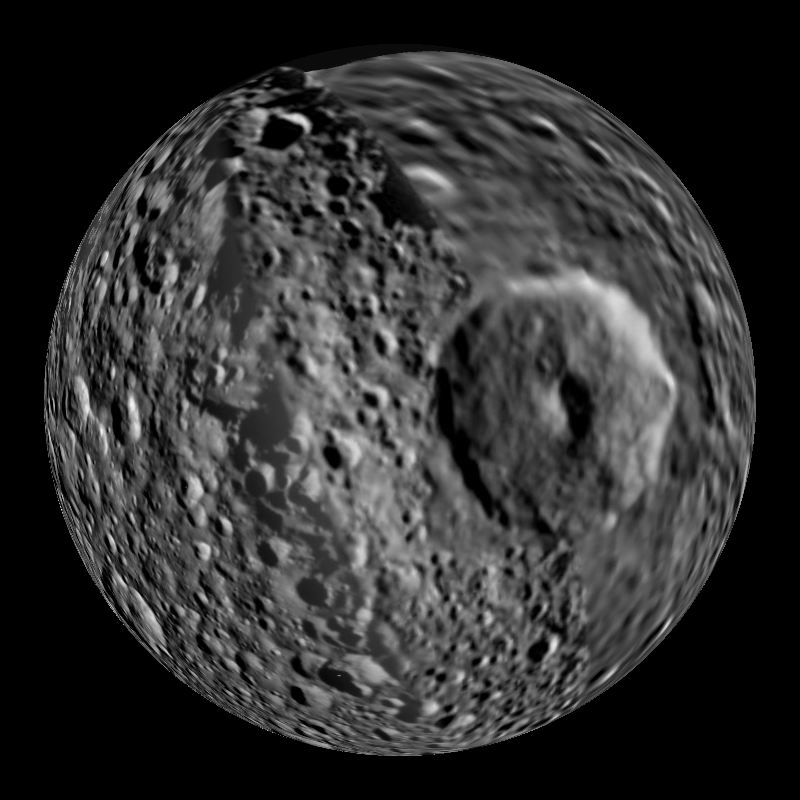 Mimas' low density suggests that the moon is mainly composed of ice with only a small portion of rock. The most distinguishing feature on Mimas is Herschel, an impact crater with a diameter of 80 miles, nearly one third the diameter of the moon. The walls of the crater rise up almost 3 miles above the surrounding surface, and within the crater, the depth is as low 6 miles. At the center of the crater there is a mountain 4 miles high, almost as tall as Mount Everest.

It is a wonder that the impact that caused the crater Herschel did not destroy the moon completely. Fractures are visible on Mimas on the opposite side of Herschel, indicating, that the impact had the potential to disintegrate the moon. The rest of the surface is covered in craters, though no others are as large as Herschel and the cratering is not uniform across the moon. Most portions of Mimas have some craters that exceed 25 miles in width, but near the South Pole, there are very few craters wider than 12 miles. Scientists are unsure what caused this uneven cratering.

The default map has enhanced color using infrared and ultraviolet filters, with saturation decreased that approximates natural color. Since Mimas is significantly out of round (shaped as a triaxial ellipsoid mainly from Saturn's tides), the apparent shapes of the craters that show on the sphere depend on the map projection used. The planetographic projection shows the crater shapes to be a bit non-circular. The layer map made using an earlier set of images is in black and white and shows the craters in a more realistic round shape.