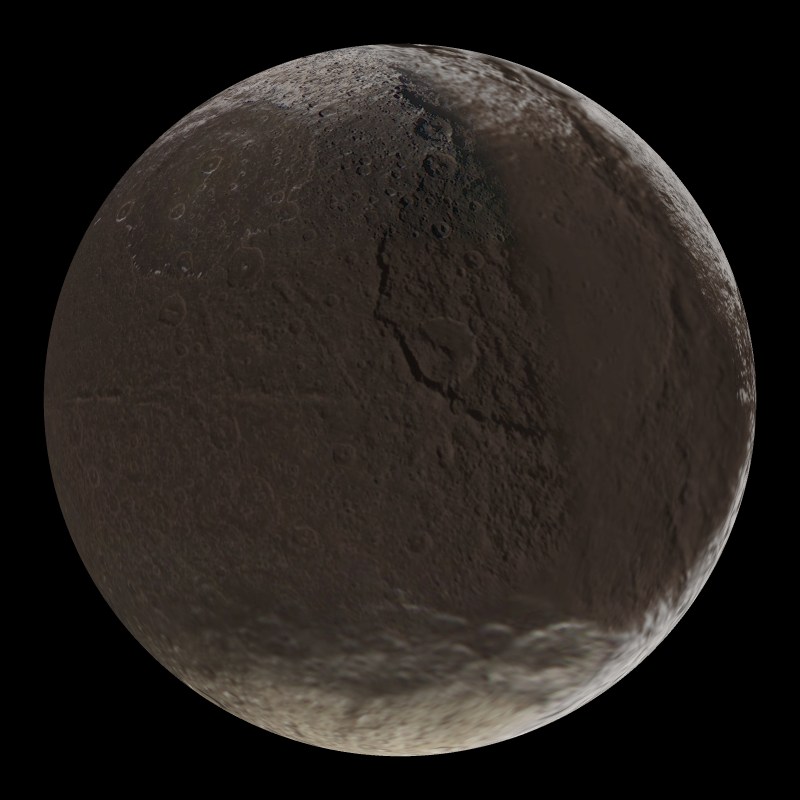 Iapetus has two distinctly different sides. The leading hemisphere is dark with an albedo (reflectivity) of .04, almost the same as asphalt. In contrast, the trailing side is bright with an albedo of .6, almost the same as snow. The dark region is called the Cassini Regio and the bright region is Roncevaux Terra. Much has been learned about the difference in coloration on Iapetus in recent years. One long-standing theory is that the moon has accumulated dust from other moons around Saturn as it travels along its orbit. Thanks to new images from Cassini's Imaging Science Subsystem, scientists have a new theory. "Close-up ISS images provide a clue, showing evidence for thermal segregation, in which water ice has migrated locally from sunward-facing and therefore warmer areas, to nearby poleward-facing and therefore colder areas, darkening and warming the former and brightening and cooling the latter." Southwest Research Institute News The edge between the dark and light region is not a sharp edge, as originally thought, but soft, with some craters lined with the dark material on one side but not the other. The dark material is superimposed over the topography, which leads scientists to believe that the coating is relatively young.

Iapetus touts not only a unique coloration, but also a ridge that follows almost exactly along the equator of the moon in the Cassini Regio. This ridge, discovered on December 31, 2004, is 8 miles higher than the surrounding land and runs over 800 miles. Reasons for the existence of this ridge are unknown, but many varying theories do exist. Iapetus is also a heavily cratered moon containing three craters with diameters greater than 200 miles. The largest of these has a diameter of over 300 miles wide with cliffs that drop over 9 miles.