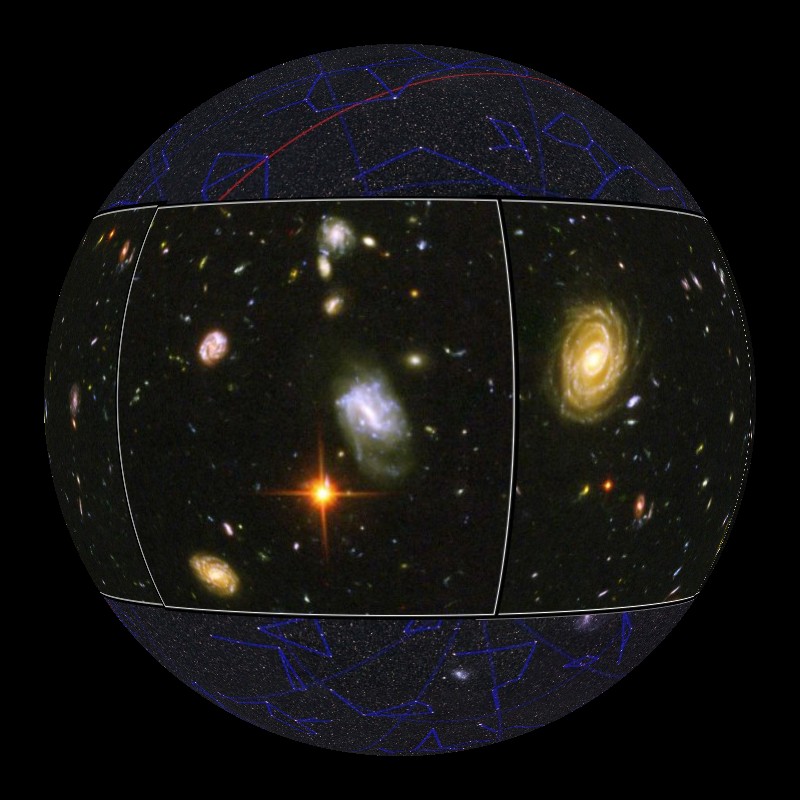 The deepest picture of the visible universe ever achieved by humankind is the Hubble Ultra Deep Field, HUDF. The picture is actually a combination of footage from two cameras that are onboard the Hubble Telescope. The two cameras are the Advanced Camera for Surveys, ACS, and the Near Infrared Camera and Multi-object Spectrometer (NICMOS). The exposure time for the picture was one million seconds, or 11.3 days. In order to achieve such a long exposure time, 800 separate exposures had to be taken over 400 Hubble orbits around the Earth. The image was taken from September 24, 2003 through January 16, 2004. The picture is of a very small piece of the galaxy in the Fornax constellation. In ground-based images of this space, it appears to be largely empty. It is only with the powerful camera aboard Hubble that distant galaxies become visible in this space. If astronomers were to take a picture like this one of the entire sky, rather than just one small piece, it would take 1 million years of exposure time.

The patch of sky that was photographed is only the size of 1/10 of the diameter of the whole moon. Astronomers say that this image is equivalent to looking through an 8 foot straw - the field of view is relatively narrow, but very deep. This new image reveals galaxies that have never before been visible, even with previous cameras aboard the Hubble Telescope. It is estimated that 10,000 galaxies are contained in the HUDF. There is a wide variety of galaxies visible in the image, some shaped like classic spirals and elliptical galaxies, and others that are very random. Astronomers say that the odd shaped galaxies are from a time when the universe was much more chaotic. This dataset starts with an all-sky view and highlights the small area where the HUDF was taken. Then some of the images from the HUDF are highlighted and displayed across the sphere.