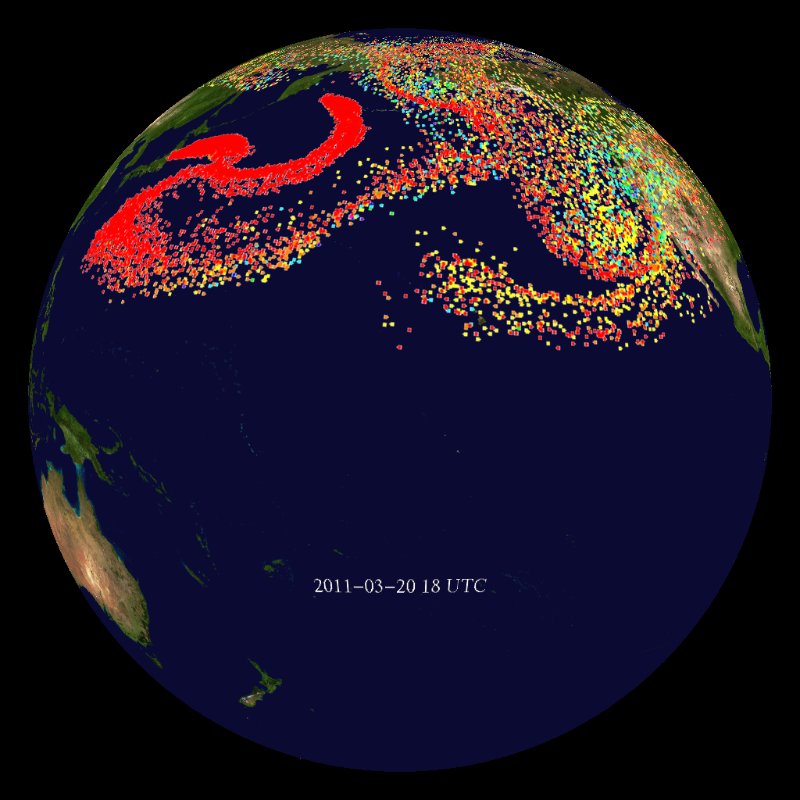 The Hybrid Single-Particle Lagrangian Integrated Trajectory (HYSPLIT) model was developed by NOAA to follow the transport and dispersion of pollutants in the atmosphere. In HYSPLIT, the computation is composed of four components: transport by the mean wind, turbulent dispersion, scavenging and decay. A large number of pollutant particles, which by convention are called "particles" but are just computational "points" (particles or gases), are released at the source location and passively follow the wind.

The 2011 Tohuku East Japan earthquake and resulting tsunami caused a variety of failures at the Fukushima Daiichi Nuclear Power Plant which resulted in radioactive emissions to the atmosphere. The earthquake occurred on March 11th at 14:26 Japan Standard Time (JST), the tsunami about one hour later at 15:41, and by 16:36 a nuclear emergency was reported. By the early morning hours of March 12th, radioactive emissions were occurring from the plant.

In this dataset, the simulation from NOAA's HYSPLIT model shows a continuous release of tracer particles from 12-31 March at a rate of 100 per hour representing the Cesium-137 emitted from Fukushima Daiichi. Each change in particle color represents a decrease in radioactivity by a factor of 10. Radioactivity decreases due to removal by rainfall and gravitational settling. Decay is not a factor for Cesium in this short duration simulation compared to its 30 year long-half life. The air concentration would be computed from the particle density so it is only partially related to the color scale. The released particles are followed through the end of April using meteorological data from the 1-degree resolution NOAA global analyses.