Earthquakes of the 20th Century 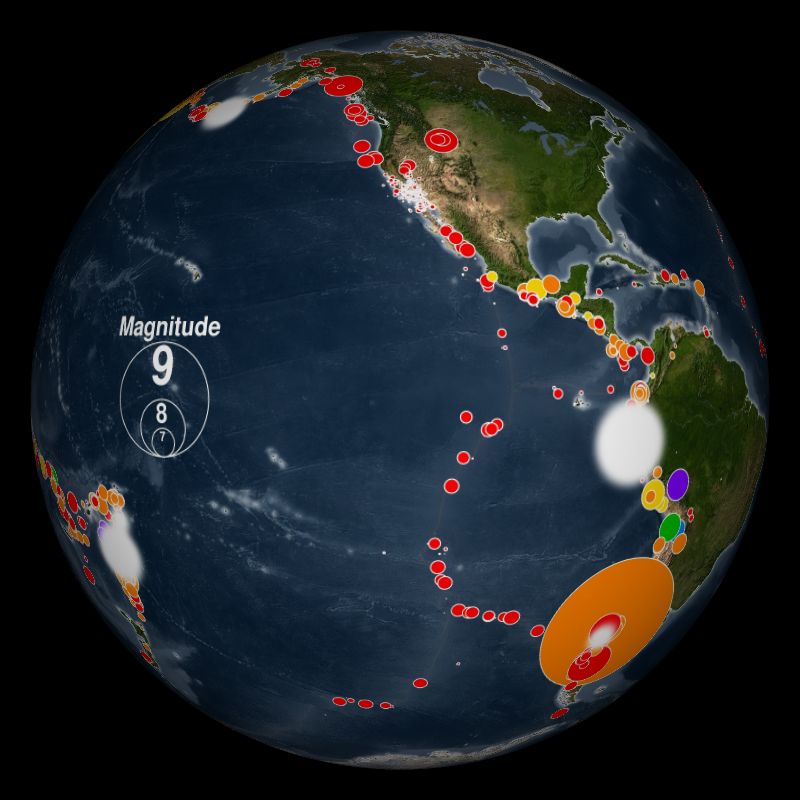 This animation shows every recorded earthquake in sequence as they occurred from January 1, 1901, through December 31, 2000, at a rate of 1 year per second. The earthquake hypocenters first appear as flashes then remain as colored circles before shrinking with time so as not to obscure subsequent earthquakes. The size of the circle represents the earthquake magnitude while the color represents its depth within the earth. At the end of the animation it will first show all quakes in this 100-year period. Next, it will show only those earthquakes greater than magnitude 6.5, the smallest earthquake size known to make a tsunami. It will then show only those earthquakes with magnitudes of 8.0 or larger, the "great" earthquakes most likely to pose a tsunami threat when they occur under the ocean or near a coastline and when they are shallow within the earth (less than 100 km or 60 mi. deep). The animation concludes by showing the plate boundary faults responsible for the majority of all of these earthquakes.

The era of modern earthquake seismology—the scientific study of earthquakes—began in the 20th Century with the invention of the seismometer and its deployment in instrument networks to record and measure earthquakes as they occur. Therefore, when the animation begins only the largest earthquakes appear as they were the only ones that could be detected at great distances with the few available instruments available at the time. But as time progresses, more and more seismometers were deployed and smaller and smaller earthquakes could be recorded. For example, note how in the 1930’s many small earthquakes suddenly seem to appear in California, but this illusion results from the installation of more and more instruments in that region. Likewise, there appears to be a jump in the number of earthquakes globally in the 1970's when seismology took another leap forward with advances in telecommunications and signal processing with digital computers, a trend that continues today.

20th Century seismology revealed the global geographic distribution of earthquakes and helped to solidify the Theory of Plate Tectonics. Notice how earthquake epicenters do not occur randomly in space but form patterns over the earth’s surface, revealing the boundaries between tectonic plates as shown toward the end of this animation. This time period also includes some remarkable events, including those that generated devastating tsunamis:

These earthquakes represent some of the largest ever recorded. Note how they all occur at a particular type of plate boundary, subduction zones where tectonic plates collide, so these are the regions where we expect future devastating tsunamis to be generated.