EarthNow: How does the Arctic Affect Extreme Weather? 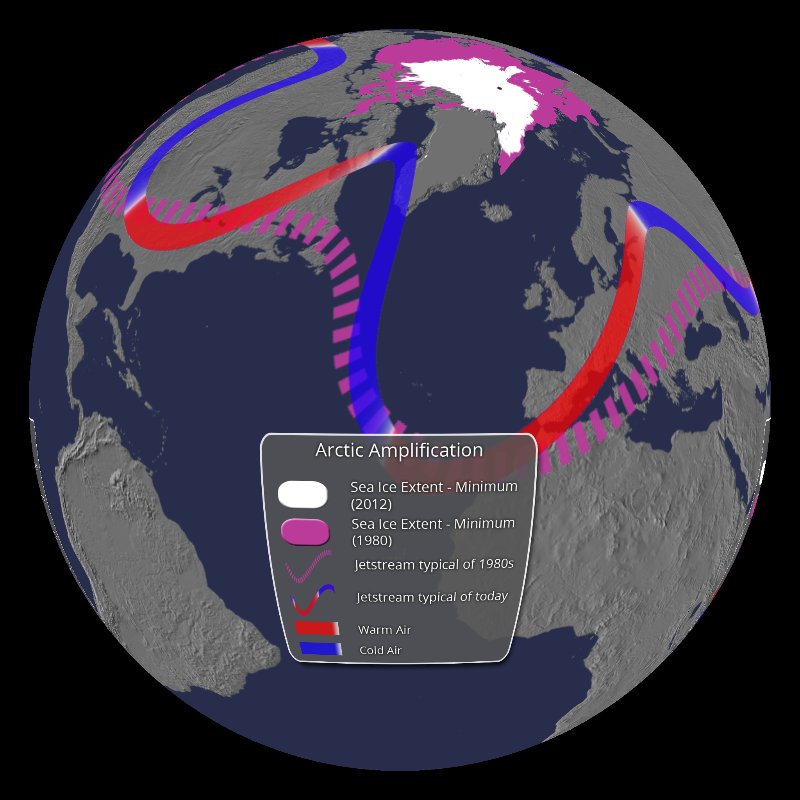 Over the past several decades, the number of extreme weather events has increased. During those same years, the Arctic has warmed twice as fast as the rest of the Northern Hemisphere. The rapid Arctic warming is referred to as Arctic Amplification, and research suggests that it may be blamed for some of the extreme weather episodes.

About the jet stream

The temperature differences between the cold poles and warm tropics, combined with the Earth's rotation, cause air to flow eastward fastest over the midlatitudes, where most of us live. This is called the jet stream.

Approaching North America, the jet stream moves northward over the Rocky Mountains, then dips southward forming a trough toward the East Coast, then northward as a ridge over the Atlantic Ocean. It continues in a similar long wave pattern over Europe, Asia, and the Pacific. Storms develop and track along the jet stream, pushing cold air south and warm air north.

What is Arctic amplification?

During the past few decades, general warming in the atmosphere has accelerated Arctic ice melt, leading to more seasonal ice cover which is not as white and absorbs more sunlight, in turn causing more warming. The Arctic has warmed twice as fast as the rest of the Northern Hemisphere. This is Arctic Amplification.

Scientists have observed that the reduced temperature difference between the North Pole and tropics is associated with slower west-to-east jet stream movement and a greater north-south dip in its path. This pattern causes storms to stall and intensify, rather than move away as they normally used to do. At midlatitudes, more extreme weather results from this new pattern, including droughts, floods, colds spells, and heat waves.

EarthNow: What does fracking mean to you?

EarthNow: Effects of El Nino and La Nina on Phytoplankton and Fish