EarthNow: Effects of El Nino and La Nina on Phytoplankton and Fish 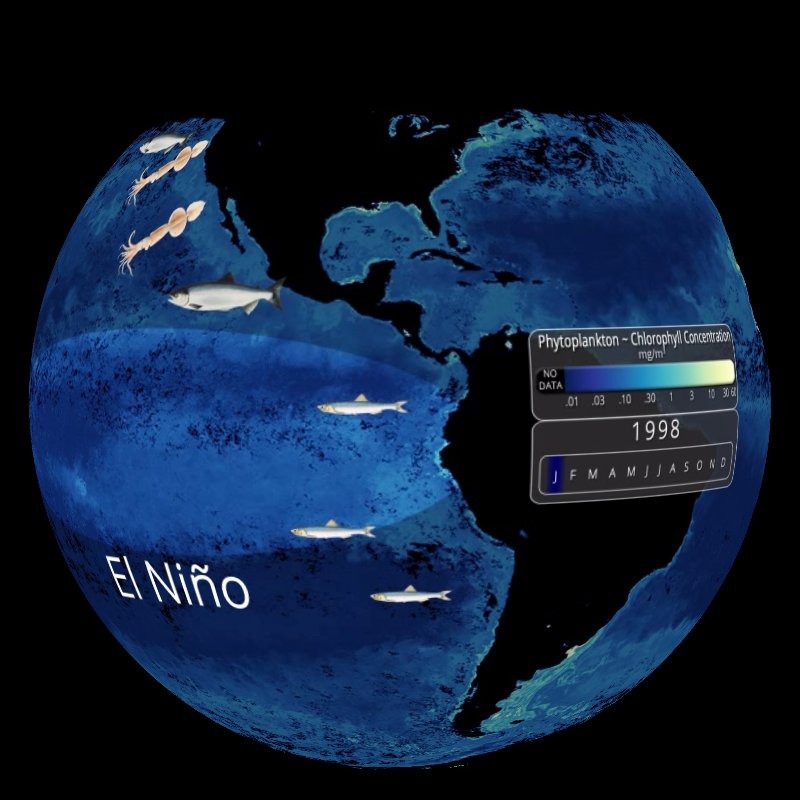 For the past 15 years, satellites that measure the color of the ocean have given us a view of sea surface phytoplankton which form the base of the food web and half of all the oxygen we breathe. These satellite data are being used to understand fish distributions and why some fisheries suddenly collapse. Read on for more information about the relationships between climate cycles like El Niño and their effects on phytoplankton and fish distributions.

Phytoplankton abundance is controlled by the availability of sunlight and nutrients. Winds over the ocean drive currents away from the coast and equator, creating a void at the surface that's filled by nutrient-rich water from the deep ocean upwelling to the sunlit surface.

Combining satellite data with samples collected from the ocean enables scientists to better understand where these microscopic plants live and support different ecosystems and how physical and chemical changes affect them.

Seasonal changes are most obvious. Slower changes are also apparent, one of the largest being El Niño in the tropical Pacific, with an approximately 5 year cycle. El Niño causes reduced upwelling, with warmer water and less phytoplankton; its opposite phase is called La Niña with more phytoplankton than normal.

Since phytoplankton form the base of the food web in the ocean, they impact animals higher up the chain. A major consequence of El Niño is the loss of commercially important species from their usual location: anchovies around South America, squid off of California, salmon around the Pacific, and others. Not only fish are impacted, but animals that depend upon them such as sea lions, seals and sea birds experience famine.

Understanding El Niño and other natural and man-made causes for fisheries collapse will guide decisions about how to help them recover.

EarthNow: What does fracking mean to you?

EarthNow: How does the Arctic Affect Extreme Weather?