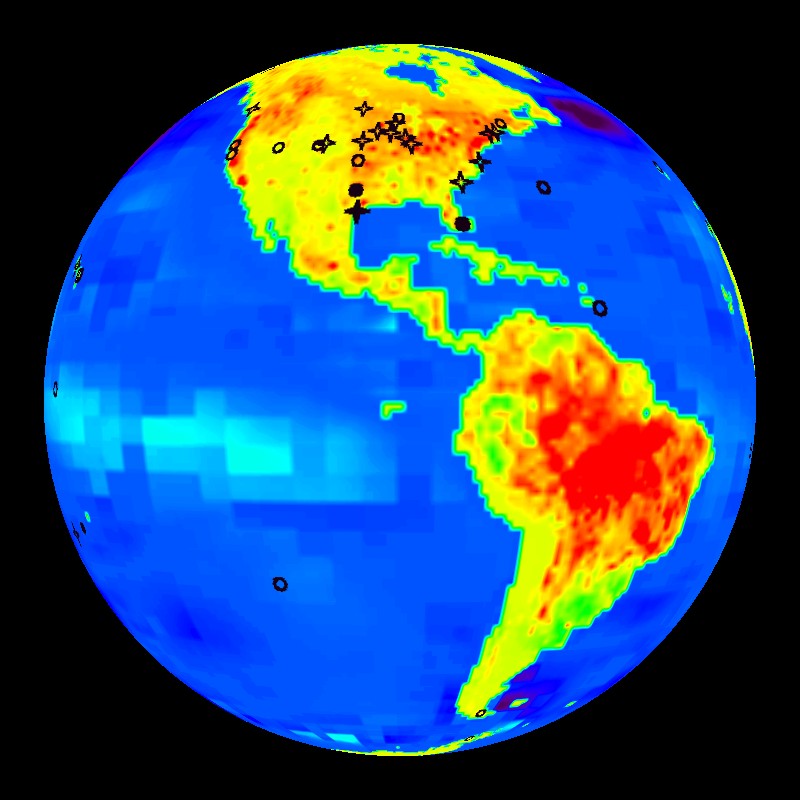 The Global Monitoring Division at NOAA diligently monitors carbon dioxide and other trace gases in the atmosphere. One of the methods they use to sample trace gases is collecting flasks of air from around the world that can be tested. They have several other means for collecting samples as well. In this data set, the NOAA GMD sampling network as of 2005 is portrayed. Circles are flask sampling locations, stars are aircraft sites (12 flasks per flight are filled) and ships, which are only visible as they race from Australia and New Zealand to the US west coast or Japan, or from Cape Town to the US east coast. The coloration in the dataset represents the fluxes constructed by the ocean, biosphere, and fossil fuel modules of the NOAA ESRL data assimilation system for CO2 and related trace gases. The data set shows daily average fluxes constructed from 3-hour model output.

Seasonally, the CO2 fluxes go through a cycle where respiration by the biosphere dominates over photosynthesis (winter, red colors), to one where photosynthesis is stronger than respiration (summer, green colors). The passage of fronts usually leads to red colors in the movie, as reduced sunlight reduces photosynthesis leading to net emissions. In late fall, high temperatures in the southern US combined with droughts leads to 'stressed' vegetation (red colors), reducing photosynthesis and thus also net emissions of CO2. The ocean fluxes mostly show a coarse pattern of CO2 concentrations in sea water, which is determined by large scale ocean circulation. Cold, CO2 rich water is brought to the surface in the Eastern Tropical Pacific, while the downward transport of warm, CO2 poor water occurs in the extra-tropics in the North Atlantic. In this dataset, the pattern and magnitude of fossil fuel CO2 fluxes is prescribed based on EPA estimates. They show up as red spots in locations of major cities.