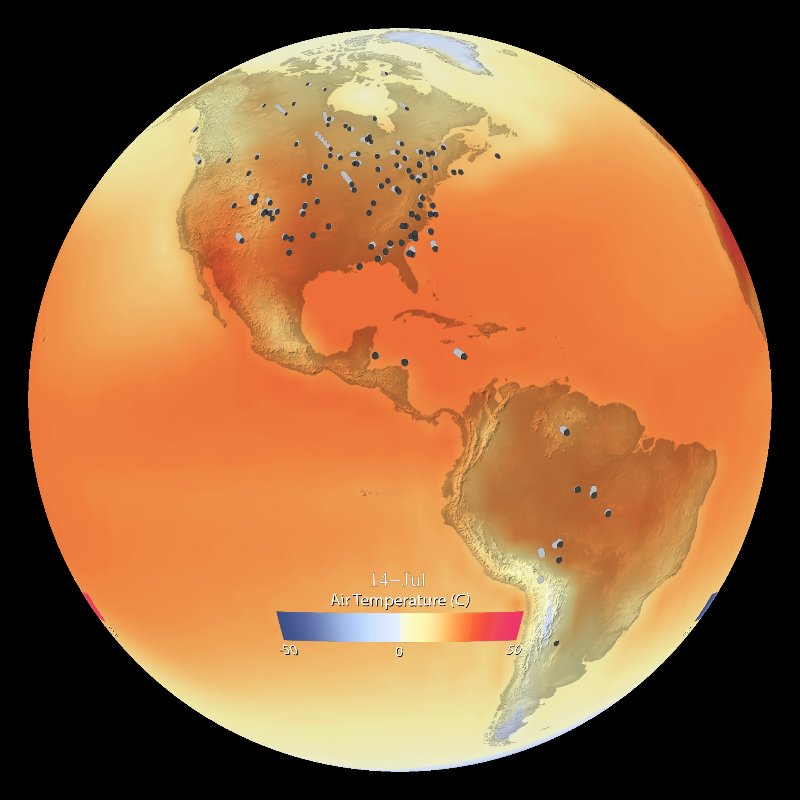 This dataset shows the migration of 118 species of terrestrial bird populations in the Western Hemisphere. Each dot represents the estimated location of the center of each species’ population for each day of the year. These estimations come from millions of observations from the eBird citizen-science database. eBird is a real-time, online checklist program, launched in 2002 by the Cornell Lab of Ornithology and National Audubon Society, that allows birdwatchers to enter their observations.

The colors in this dataset represent the average daily air temperature at the surface, calculated from observations from 1981-2010. The yellow and red colors represent warmer air, while blues show areas below freezing.

A recent study that explored these trajectories, published in the Proceedings of the Royal Society B, found broad similarities in the routes used by specific groups of species. A key finding from the study is that bird species that head out over the Atlantic Ocean during autumn migration to spend winter in the Caribbean and South America follow a clockwise looped trajectory and take a path farther inland on their return journey in the spring. Species that follow this broad pattern include Bobolinks, Yellow and Black-billed cuckoos, Connecticut and Cape May warblers, Bicknell’s Thrush, and shorebirds, such as the American Golden Plover. These looped pathways help the birds take advantage of more favorable winds during spring and autumn migration. For species that do not fly over the open ocean, the study finds that many use the same migration routes in the spring and fall. Geographic features shaping this pattern include mountain chains or isthmuses that funnel migrants along narrow routes. Additional details on the 118 species can be found here.