The Solar Terrestrial Relations Observatory, STEREO, which consists of two satellites, was launched in October 2006. The two satellites are on a path similar to Earth's orbit, with one satellite ahead of Earth and one satellite behind Earth in orbit. The satellites, named STEREO Ahead and STEREO Behind, are slowly drifting further a part, keeping Earth between them. As they drift further from the Earth, they are able to provide a view of the sun that cannot be seen from Earth. The satellites passed 180 degrees of separation on Feb 6, 2011, providing a view of the far side of the sun for the first time. The two STEREO spacecraft provide a stereoscopic view of the Sun and its atmosphere, similar to the way our two eyes allow us to see the three-dimensional world around us. Being in permanent orbit about the Sun, the pair will continue their migration, and will cross behind the sun in 2015. Since passing the 180 degree mark, the STEREO mission now has a growing blind spot on the earthward view of the sun. To complete these observations, the maps also include data from the Solar Dynamics Observatory (SDO) taken at the same time and wavelength band. SDO was launched in February 2010, and has been providing nearly continuous images of the Sun since June 2010.

There are two STEREO/SDO datasets for Science On a Sphere, both from the extreme ultraviolet wavelength, which the human eye cannot see directly. In order to keep all of the various wavelengths straight, scientists color the different wavelengths. The 195A wavelength is arbitrarily colored green, while orange was selected for the 304A wavelength. The 195A wavelength is able to detect ionized iron at about 1.5 million degrees C and the 304 A wavelength detects ionized helium at about 60,000 degrees C. The brighter areas in both images show greater intensity of the material and this is where magnetic forces are the strongest. In normal filtered light, these areas would often appear as sunspots. It is in these bright, active regions where solar storms are likely to originate. In these areas, hot plasma from the sun is trapped in the sun's magnetic field. A solar flare is an explosion that occurs when the energy trapped in the magnetic field is suddenly released. Solar flares are often associated with Coronal Mass Ejections (CME) which are outflows of plasma from the sun that can cause geomagnetic storms on Earth. CMEs can occur and often do without a solar flare as well. The dark areas that can be seen are called coronal holes, and are areas where the plasma is able to escape because the magnetic field is open. These real-time datasets are updated daily with a five day data lag. There is one image for every ten minutes. 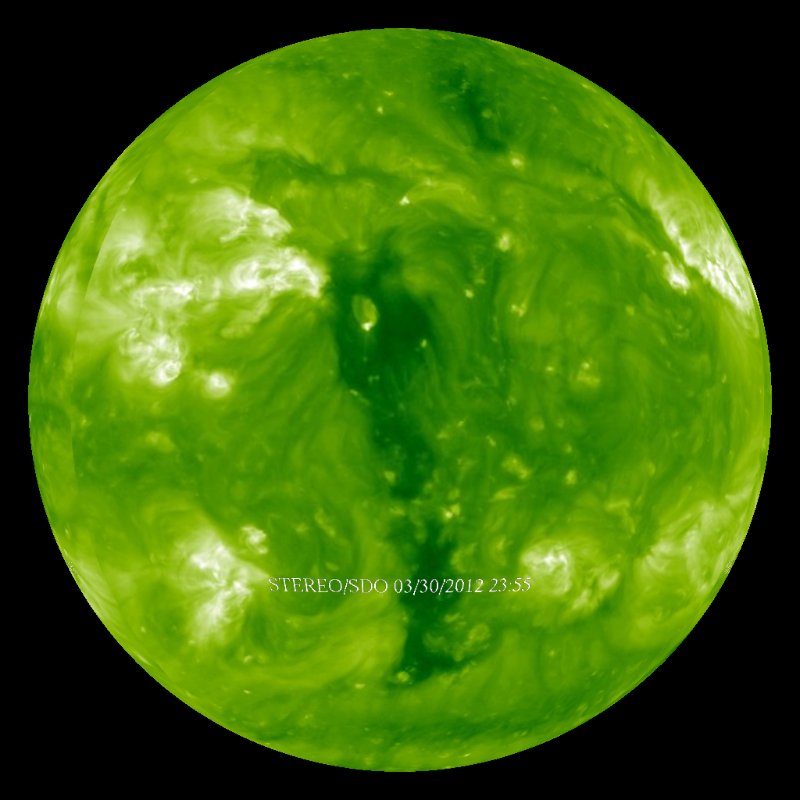