The sun is often most interesting to observe at Extreme Ultra-Violet (EUV) wavelengths rather than visible wavelengths. In the EUV, the sunspots and active regions are bright instead of dark and the solar magnetic field can be observed as loops around the active region. Solar physicists and space weather forecasters watch the sun with special EUV cameras mounted on satellites. One such satellite, the NASA Solar Dynamics Observatory (SDO), carries the Atmospheric Imaging Assembly which images the solar atmosphere in multiple EUV wavelengths. By imaging the sun at a resolution of about 1 arcsecond and at a cadence of 10 seconds, this instrument is designed to provide an unprecedented view of the part of the solar atmosphere called the corona. At this resolution, each AIA image contains 2048 x 2048 pixels or 17 Megapixels. The primary goal of the AIA Science Investigation is to use these data to significantly improve our understanding of the physics behind the activity displayed by the Sun's atmosphere, which drives space weather.

This sequence shows the helium 30.4 nm channel which highlights the active network and filaments on the sun. Five days of data were collected from 5-9 September 2011 at a 2.5 minute cadence. These images were stretched and modified to create a more realistic display for the SOS format. It should be noted that the SDO imagers can only see one side of the sun so it is impossible to know what is going on around on the back side. In order to create a full 360 sequence of images, the central part of the sun, where the resolution is the best, was repeated three times to create the appearance of the full sun. You can see that the bright active region appears three times and there is a region where each image overlaps its neighbor creating a slight blurring of the image.

During this sequence, there are several things to look for. First, the active network of the sun is constantly boiling and churning. Then there are long dark thread-like features call filament channels. There are the bright active regions with complex magnetic loops that shift and change. And then throughout this sequence, there are a number of solar flares that erupt from the brightest active region. You have to watch carefully to see them. When the flare erupts, the magnetic loops around the flare rearrange and change. And a blast wave expands across the surface of the sun emanating from the flare.

Solar flares often initiate a sequence of events called Space Weather. The solar flare itself can impact radio communication at Earth. The flare can initiate a Coronal Mass Ejection (CME) which travels at several million km per hour and, if it hits Earth, can create a lot of problems for satellites, airlines, electric power lines, and GPS. The CME can create a geomagnetic storm that produces aurora.

This sequence was created by undergraduate students in the NSF Research Experience for Undergraduates program in cooperation with NASA and the NOAA Space Weather Prediction Center. 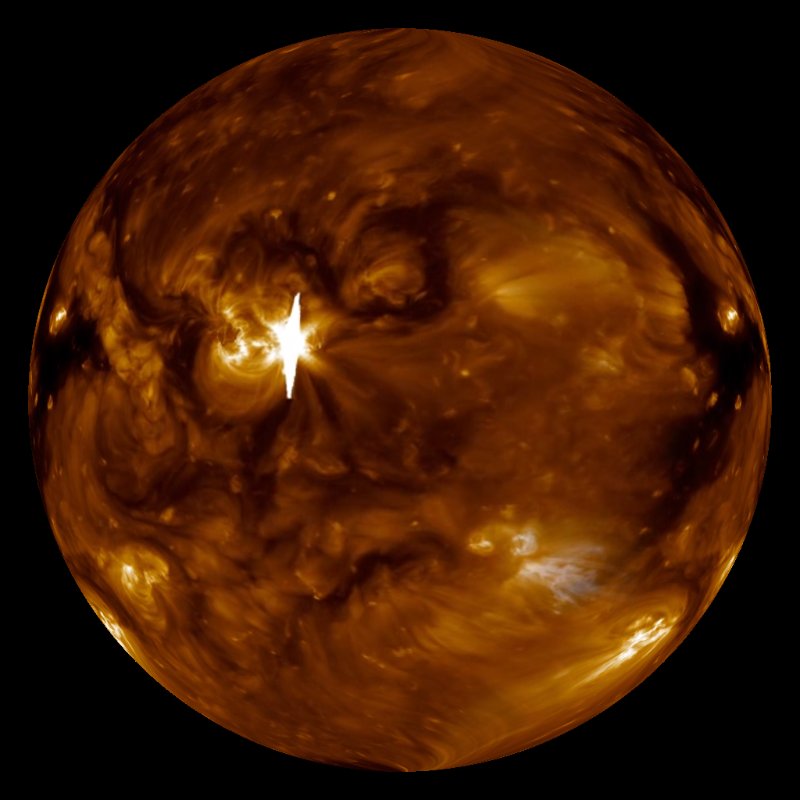