Daylight turns into twilight and the temperature drops rapidly revealing large delicate streamers of light (the solar corona) streaking out from the silhouette of the moon. A total solar eclipse is a natural phenomenon, nevertheless, in some ancient and modern cultures, solar eclipses have been attributed to supernatural causes or regarded as bad omens. A total solar eclipse can be frightening to people who are unaware of its astronomical explanation, as the Sun seems to disappear during the day and the sky darkens in a matter of minutes. The approach the moon's inner shadow projecting on the atmosphere can look like an approaching storm, and an eerie orange twilight color rings the horizon during the total phase.

If the Moon were in a perfectly circular orbit, a little closer to the Earth, and in the same orbital plane, there would be total solar eclipses every month. However, the Moon's orbit is inclined (tilted) at more than 5 degrees to the Earth's orbit around the Sun, so its shadow at new moon usually misses Earth. The orbital planes cross each other at a line of nodes resulting in at least two, and up to five, solar eclipses occurring each year; no more than two of which can be total eclipses. However, total solar eclipses are rare at any particular location because totality exists only along a narrow path on the Earth's surface traced by the Moon's inner shadow or umbra.

Since looking directly at the Sun can lead to permanent eye damage or blindness, special eye protection or indirect viewing techniques are used when viewing a solar eclipse. It is technically safe to view only the total phase of a total solar eclipse with the unaided eye and without protection; however, this is a dangerous practice, as most people are not trained to recognize the phases of an eclipse. The partial phase can span 2-3 hours while the total phase can only last up to 7.5 minutes for any one location. In order to see the most impressive experience, the location for which you choose to view the eclipse should be clear and sunny. NOAA's cloudiness map may improve your experience!

Totality for the August 21, 2017 eclipse can be seen within about a 70 mile wide path from portions of the following U.S. States: Oregon, Idaho, Wyoming, Nebraska, Missouri, Kansas, Illinois, Kentucky, Tennessee, North Carolina, Georgia, and South Carolina. Maximum duration for this total eclipse is 2 minutes 40 seconds. The partial phases last almost 3 hours. This dataset shows the motion of the Moon's shadow on the Earth depicting the relative darkness of the inner shadow, called the umbra where the eclipse is total, and the outer penumbra where the eclipse is partial. A transparent overlay delineates more specifically where the umbra (inner black dot) and the penumbra (large gray circle) are located. Other overlays show some of the cities in the path of totality and a diagram showing the alignment of Sun, Moon, and Earth. 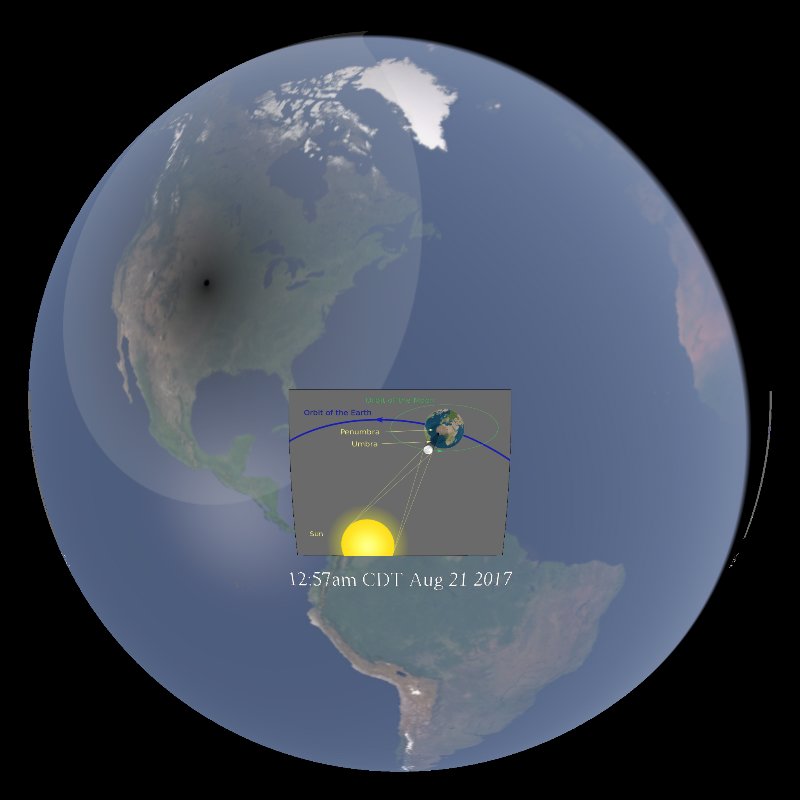