To increase understanding and predictive capability for the ocean’s role in future climate change scenarios, the NASA Modeling, Analysis, and Prediction (MAP) program has created a project called Estimating the Circulation and Climate of the Ocean, Phase II (ECCO2): High-Resolution Global-Ocean and Sea-Ice Data Synthesis. ECCO2 produces increasingly accurate syntheses of all available global-scale ocean and sea-ice data at resolutions that start to resolve ocean eddies and other narrow current systems, which transport heat, and other properties within the ocean. ECCO2 data syntheses are created by using the available satellite and in-situ data in the Massachusetts Institute of Technology General Circulation Model (MIT GCM). ECCO2 simulates ocean flows at all depths, but only surface flows are used in this visualization. The global sea surface current flows are colored by corresponding sea surface temperatures. The sea surface temperature data is also from the ECCO2 model.

These surface flows and temperatures represent only the top few meters of the oceans. They are primarily driven by the surface winds, traveling at about 3% of the speed of the winds. The distribution of solar energy from the equators to the poles also contributes to the currents, with the oceans responsible for 40% of the global heat transport.

The dominant features are the five subtropical gyres caused by the surface winds. These gyres are centered around high pressure zones in the North Atlantic, North Pacific, South Atlantic, South Pacific, and the Indian Ocean. Circulation moves clockwise in the northern hemisphere, and counterclockwise in the southern hemisphere. The ocean circulation close to the equator are primarily east to west, again, in the direction of the surface winds. The rotating gyres include a northward flow in the western Atlantic and western Pacific moving the warm waters toward the north pole. The cooler waters flow south in the eastern Pacific and Atlantic in its return to the equator. There is one primary circulation in the Indian Ocean about the equator with seasonal variability. Below about 50 degrees south is the eastward circumpolar current around Antarctica, following the direction of the surface winds similar to the other major current systems. This visualization shows the ocean surface currents and temperatures around the world from March 2007 through March 2008. 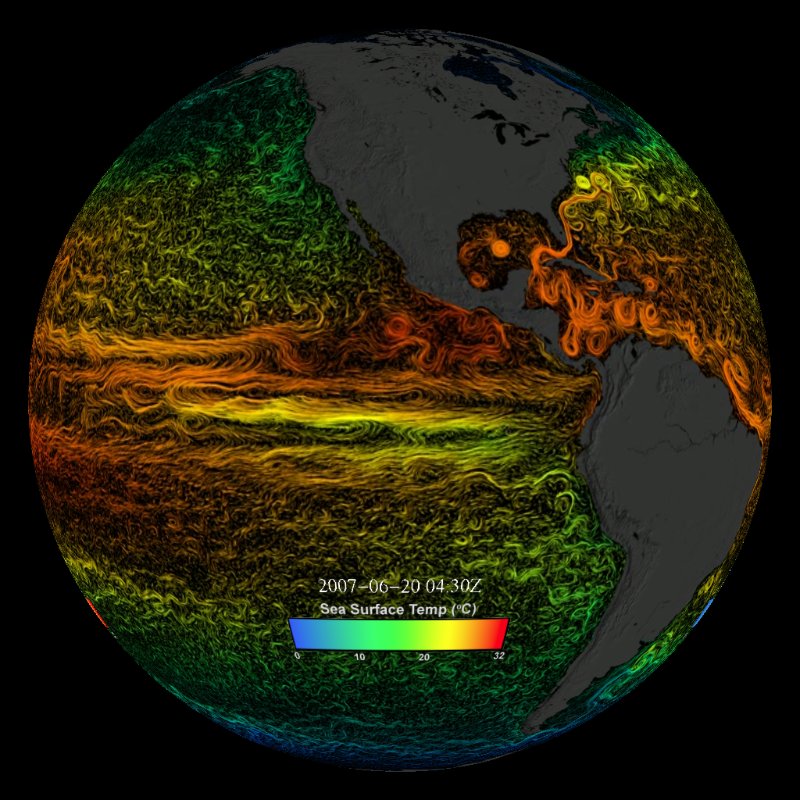