Permalink to What causes the light that we call the aurora:

The light in the upper atmosphere is caused by energetic electrons zipping down the magnetic field lines of Earth and colliding with the atoms and molecules of the atmosphere (primarily O and N2). When the electrons collide with the atmosphere, they transfer momentum energy into excited states of the atom or molecule. When the atoms and molecules relax back to their ground state, they release photons that we can see.

Permalink to Colors of the aurora:

The most common color is a pale yellowish green which occurs at a very specific wavelength (557.7 nm). It is produced by atomic oxygen. The other common color is a red glow at 630.0 nm which is also produced by oxygen. Sometimes the lower edges of aurora rays can be a bluish purple (427.8 nm) from molecular nitrogen. And if you see aurora near sunrise or sunset, the sunlight hits the tops of the auroral rays and ionizes the excited nitrogen to create a purple color. There are many other colors in the aurora but they are either too dim to see with the naked eye or they are outside the visible spectrum, either in the infrared or ultraviolet (where the human eye can't see them).

Permalink to What causes aurora:

The process of accelerating electrons into the atmosphere actually starts at the sun. When the sun is active (near solar maximum), it can eject large blobs of plasma called Coronal Mass Ejections (CMEs). A CME is a billion tons of material traveling at up to 2000 km/sec (or 4.5 million miles/hour). If the CME is directed toward Earth, it will take one to three days for it to travel the 150 million km (96 million miles) from sun to Earth. When it reaches Earth, the magnetic field of Earth deflects much of the CME around Earth but some of the more energetic particles can enter the Earth's magnetic field or Magnetosphere. And even though much of the mass is deflected around Earth, the impact can jar the magnetosphere and shake it up causing it to change configuration. All of this shaking and reconfiguring can accelerate electrons that are normally trapped within the magnetosphere. The accelerated electrons are still confined to follow the magnetic field lines of Earth but now they travel down the field line and collide with the atmosphere. Early scientists made the connection between an increase in sunspots (active regions on the sun) and an increase in the intensity and frequency of the aurora.

During solar minimum when CMEs are less likely, it is still possible to have strong aurora. A feature on the sun called a coronal hole is associated with strong background solar wind. Normally the solar wind flows about 300-500 km/sec but from a coronal hole, the solar wind can flow to 800 km/sec. This increase in solar wind speed can also cause the magnetosphere to reconfigure, the electrons to get accelerated, and aurora to form. These auroral displays are less dramatic than those associated with CMEs but they can still be quite spectacular if you are in the right place at the right time.

When CMEs hit the magnetosphere or when strong solar wind from a coronal hole shakes the magnetosphere, it causes the magnetic field to change and reconfigure. Magnetic field lines can break and reconnect which can in turn accelerates electrons. All of these changes result in a change in the magnetic field of Earth. If you hold a magnetic compass very still during a strong geomagnetic storm, you might observe the needle moving around. One of the consequences of this is that migratory birds that use Earth's magnetic field to know where to fly, will lose their way. Pigeon racers know about this and will not let their pigeons fly during big geomagnetic storms.

Permalink to Where to go to observe the aurora:

Here are several suggestions on what to consider when looking for aurora. First it must be dark. Traveling to the polar regions in the summer won't work because the sun is up 24 hours a day. Second, it must be clear. Often coastal regions are cloudy so going someplace away from the oceans improves probabilities of seeing aurora. Third, it is good to get away from other sources of light such as cities, streetlights, and even the full moon. Fourth, you should stay up and watch for aurora between 10 PM and 1 AM local time. That is when the aurora is the brightest and most active. And finally, it is good to have some geomagnetic activity. The aurora is visible somewhere on Earth nearly all the time. But it is usually just a few faint arcs that do not move or change very much. Geomagnetic activity will cause the aurora to get brighter, to move further towards the equator, and to become more active.

Permalink to Figure: Where you can see aurora for various levels of geomagnetic activity.

The SOS Display of Aurora:

Permalink to The SOS Display of Aurora:

This SOS sequence is layered over the Earth at Night dataset and shows the output from the OVATION Prime model of the aurora. It represents the approximate location and intensity of the aurora over a 24 hour period. Each frame is five minutes. This sequence captures a moderate sized geomagnetic storm (reaching 7 on a scale of 0 to 9). The OVATION Prime model uses the speed of the solar wind and the interplanetary magnetic field. The solar wind takes 20 to 50 minutes to travel from the L1 point to Earth, where it is observed, so this model provides a forecast of the aurora with 20-50 minute lead time. This model was developed by P.Newell at the Johns Hopkins Applied Physics Lab. It is being run in real time at the National Geophysical Data Center (NGDC) and the displays and web page are produced by the Space Weather Prediction Center. You can see this model in realtime at helios.swpc.noaa.gov/ovation. 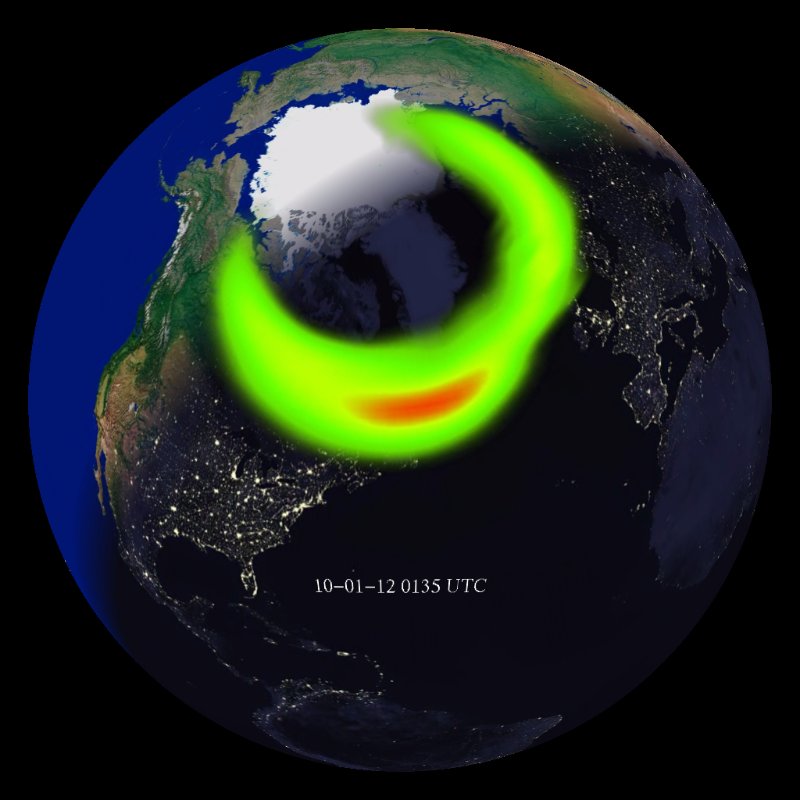