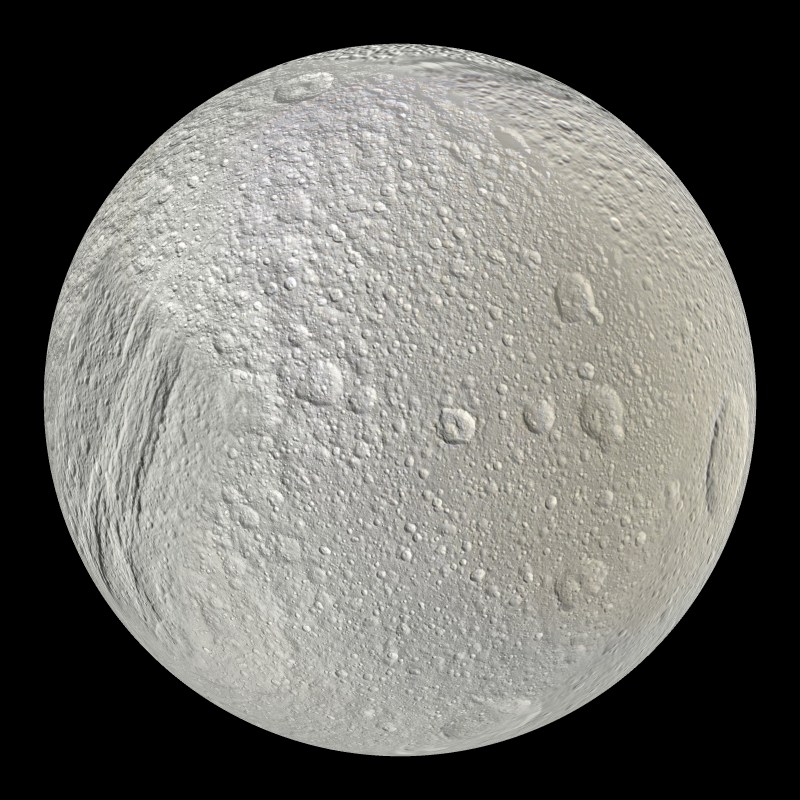 Tethys is thought to be composed almost entirely of water-ice because of its incredibly low density. But the moon was not always solid ice. Many of the surface features of Tethys can be explained by a liquid body turning to ice. Dominating the planet is a huge valley name Ithaca Chasma, which is over 60 miles wide, in excess of 3 miles deep in places and 1240 miles long. This valley runs 3/4 of the way around Tethys’ circumference. Scientists believe that this valley was created as the moon began to freeze. It is thought that the outer shell froze first, and when the core froze and expanded, the crust had to crack due to the expansion, creating the Ithaca Chasma.

Another feature on Tethys, Odysseus, points to that fact that at one point the moon was not completely solid. Odysseus, is an impact crater with a diameter that is nearly 2/5 of Tethys’ diameter. Had the moon been solid ice during the collision that caused this crater, it is likely that Tethys would have shattered into pieces. The crater is also relatively smooth, lacking the ridge around the edge and a mountain in the center as seen in most large craters. Other than Odysseus, the surface is fairly smooth with only smaller craters dotting the landscape, suggesting that the moon’s surface is young.