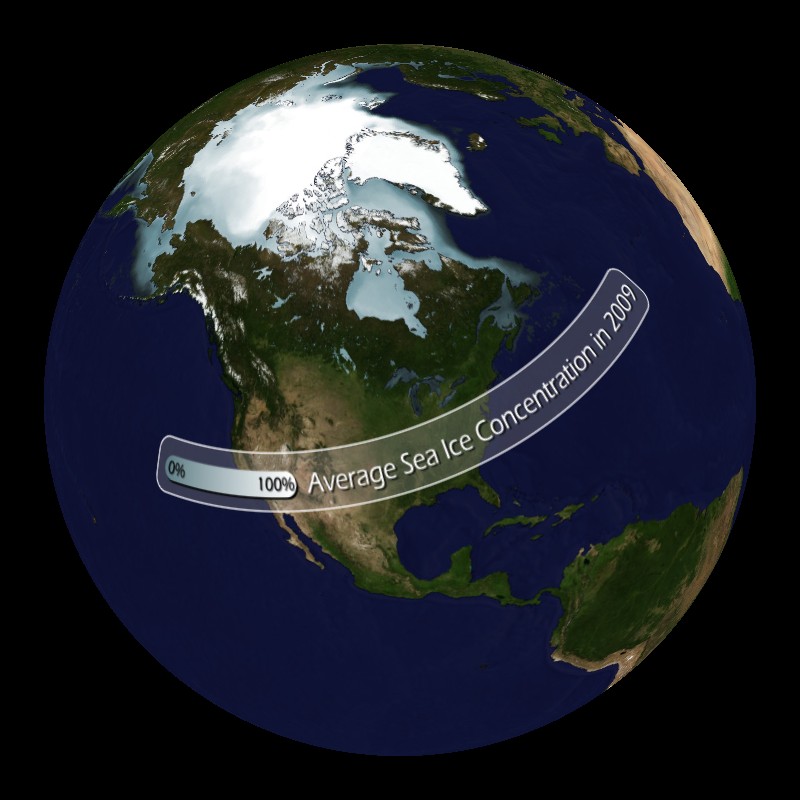 Sea ice is simply ocean water that has frozen. At least 15% of the ocean is covered by sea ice some part of the year. This means that on average, sea ice covers almost 10 million square miles (about 25 million square kilometers) of the Earth. Sea ice concentrations are monitored closely by scientists because changing sea ice concentrations can have a huge impact on the rest of the globe. Global warming is amplified in polar regions. Because of this, monitoring changes in sea ice can be a good indicator of climate change. The Global Snow and Ice Cover Map that is used in this dataset is created from a combination of observations from NOAA Advanced Very High Resolution Radiometer, Meteosat Second Generation Satellite Spectral Response Characterisation, GOES Imager and Defense Meteorological Satellite Program Special Sensor Microwave/Imager. The resolution is 2 km.

On Sept 12, 2009, the extent of sea ice in the Arctic reached the third lowest level ever recorded since satellite records began in 1979. The National Snow and Ice Data Center estimates that the overall extent dropped to 5.1 million square kilometers, well below the average minimum extent of 6.71 million square kilometers (1979-2000). Only 2007 and 2008 have had lower ice extents. The small increase in 2009 was mostly due to ice spreading caused by strong polar winds. Ice concentration and thickness, however, have not increased, making predictions about a rebound in Arctic ice premature at this moment.