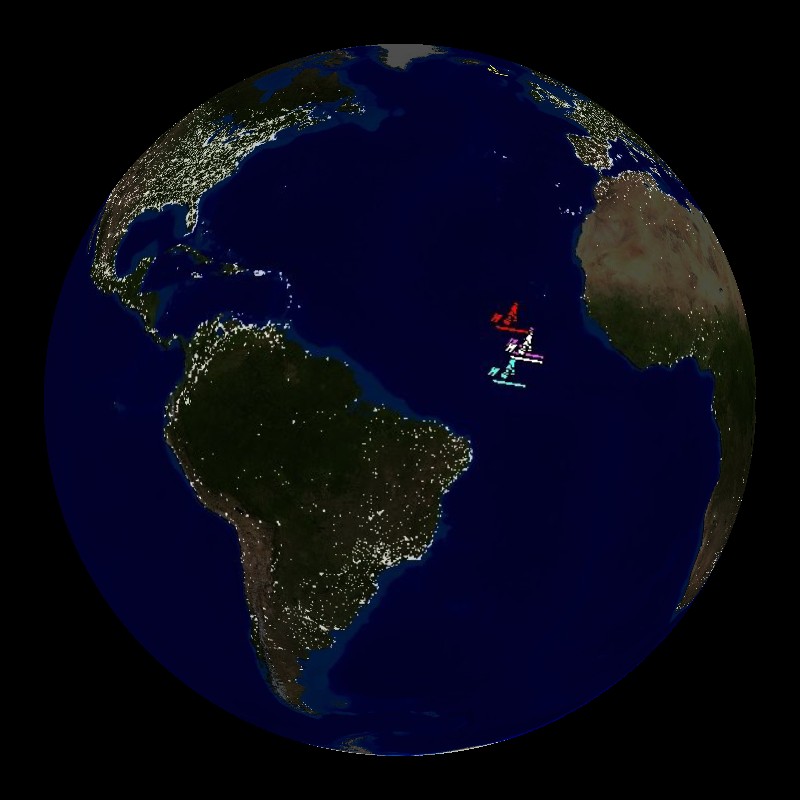 In order to enable coordinated science observations, the Earth Observations System has created the A-Train. When finally completed in 2008, the A-Train will consist of 6 polar-orbiting satellites that travel just minutes apart in a line. Four of the satellites are NASA satellites, one is a French Centre National d'Etudes Spatiales (CNES) satellite, and the other is a joint satellite between NASA and CNES. The satellites have low polar orbits 438 miles (705 km) above Earth at an inclination of 98 degrees. Together, their overlapping science instruments give a comprehensive picture of Earth weather and climate. The "A" in the A-Train is for "afternoon" because the lead satellite, Aqua, crosses the equator at the mean local time of approximately 1:30pm. Five of the satellites are currently in orbit, and the sixth satellite is scheduled to be launched in 2008.

This dataset illustrates the movement of 5 of the 6 satellites that will make up the A-Train. The 6th satellite, the Orbiting Carbon Observatory, OCO, is not shown in this dataset because as of 2007, it has not yet been launched. The lead satellite, shaded an aqua color, is NASA's Aqua satellite. This satellites main mission is to monitor the water and energy cycle. The next satellite, just 30 seconds behind Aqua, is the CloudSat. This white satellite in the dataset is used to study clouds. The next satellite, the Cloud-Aerosol Lidar and Infrared Pathfinder Satellite Observations (CALIPSO) is used to study clouds and aerosols and is colored pink in this dataset. CALIPSO, the joint NASA/CNES satellite, is only 15 seconds behind CloudSat. Behind CALIPSO by one minute is the CNES satellite PARASOL (Polarization and Anisotropy of Reflectances for Atmospheric Sciences couple with Observations from a Lidar). PARASOL, which is red in this dataset, is used to study clouds and aerosols. The last satellite currently in place is Aura. This is the yellow satellite that trails behind the rest by 13 minutes. Aura is used to observe atmospheric chemistry. This dataset covers a 24 hour period and the background shows the movement of sunlight over the globe.