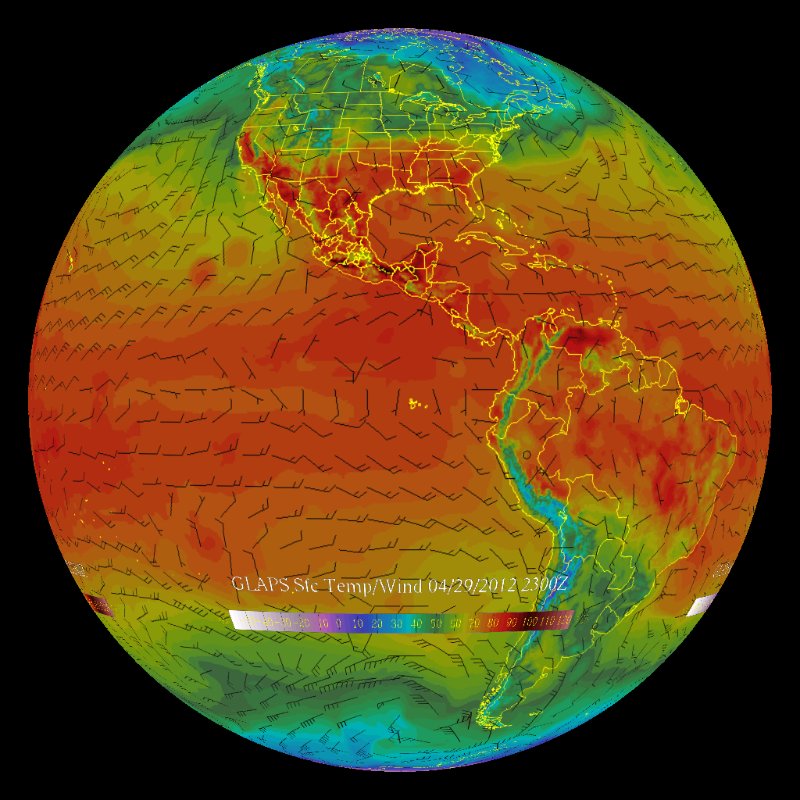 The Global Analysis and Prediction System, GLAPS, produces maps for several weather parameters over a large global domain. There are seven GLAPS products available for Science On a Sphere®. It is important for meteorologists to know the current conditions, not only in their local area, but also globally. A computer model is used to create a first guess as to what the map should look like, and then observations are added to enhance the map. The observations come from Doppler radars, satellites, wind and temperature profilers, radiometric profilers, as well as aircraft. GLAPS is such a powerful tool because of its ability to consolidate observations from so many different sources. The GLAPS datasets are available in real-time, updating hourly, and include the data for the past week.

Every real-time GLAPS dataset all updates hourly. GLAPS SFC Temperature + Wind shows surface air temperature as an image with surface air temperature contours and wind barbs overlaid. The color variation shows temperature in F. Red/yellow are the hottest areas while blue/purple/white are the coldest. Wind barbs are included to show wind speed and wind direction. The barbs point in the direction the wind is blowing and each half tickmark represents 5 knots, full tickmarks are 10 knots and a flag is 50 knots. Wind barbs show rotating winds as the air moves quickly in and up around an area of low pressure (L), while the opposite happens around the areas of high pressure (H). Pressure is not shown in this particular dataset, but pressure can be inferred by watching the wind barbs. The temperature colorbar is below.