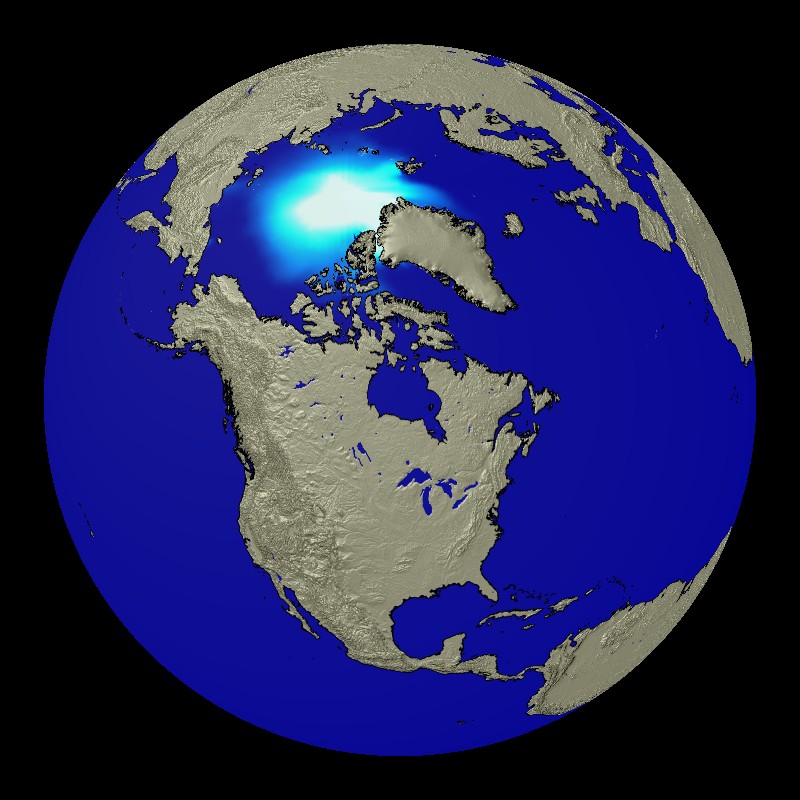 In the coming decades, the Arctic region is projected to warm at about twice the rate of the global average according to the scientists at NOAA's Geophysical Fluid Dynamics Laboratory. This is not good news for the Arctic sea ice. In fact, the concentration of sea ice in the northern latitudes has been decreasing over the past 30 years and this trend is expected to continue as the climate changes. The disappearance of sea ice can have a major impact globally. Melting sea ice can disturb the global ocean conveyor belt, impact sea life and the fishing industry, and change the Earth energy budget. Sea ice cools the climate because it is reflective and so returns much of the sun's warming back to space. As the ice melts, more of this energy is absorbed in the darker ocean water. The temperature increases as more sunlight is absorbed rather than reflected. This is a positive feedback loop because as temperature rises, more sea ice melts causing increased absorption which leads to rising temperatures.

In order to better understand how the climate is changing and the extent of the impact on the Arctic sea ice, scientists create models designed to simulate what has happened and what is likely to happen in the future. The model output for this dataset comes from GFDL's CM2.1 coupled model. The simulation of past years takes into account the historical record of greenhouse gases, volcanic aerosols, black and organic carbon aerosols, sulfate aerosols, ozone, solar irradiance, and land surface changes. For the future, they use the SRES A1B scenario from the Intergovernmental Panel on Climate Change, which assumes a mid-level increase in 21st century greenhouse gas levels. This simulation shows the change in the average sea ice concentration for August, September, and October. The sea ice in the Arctic is at a minimum during these months. Rather than steadily decline, the sea ice is projected to go through periods of small and large changes. In fact, it is thought that the melting of the sea ice could accelerate through the 21st century, with very little summer sea ice remaining by the year 2100.