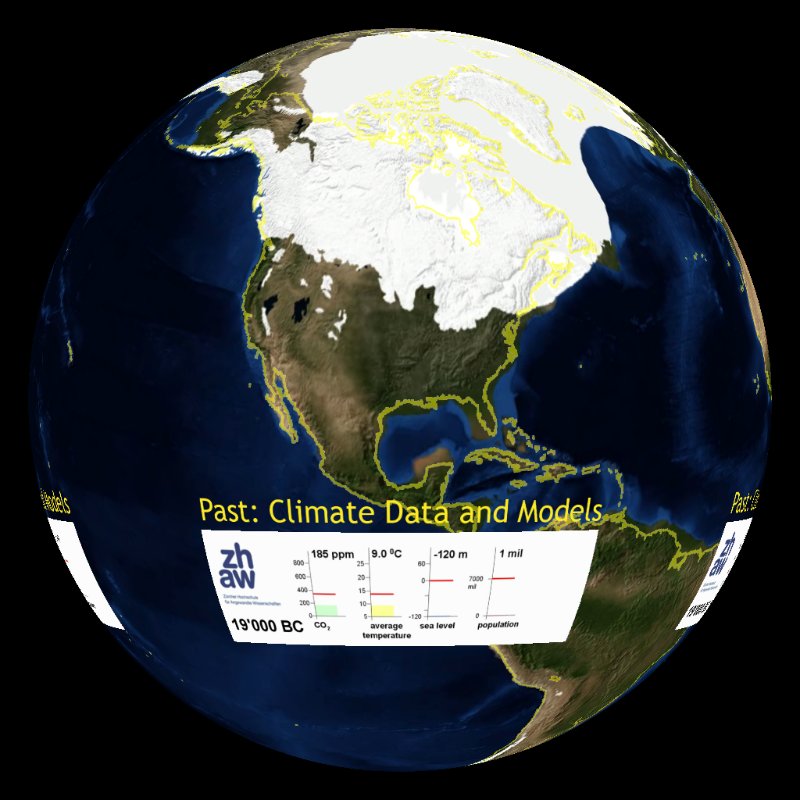 The Earth has been through many changes and continues to change today. To better understand these changes, the Zürich University of Applied Sciences created a simulation using past climate data, observations, and computer models. The simulation starts 21,000 years ago and ends 8,000 years in the future, showing the changes in ice concentration, sea level, and vegetation. 19,000BC was chosen as the start date because this was the last glacial maximum, when the Earth's ice sheets were at their maximum extension. As seen in the animation, much of northern Europe and North America were covered in ice in 19,000BC. The labels for the animation include information about carbon dioxide concentration, average temperature, sea level and population. The red line indicates the current levels. The yellow borders on the map represent the current coastlines. The data from 19,000BC to 2,000AD includes the most up-to-date paleoclimate data that is available. A list of sources can be found here. Some notable events in the past simulation include:

For the time frame from 2,000AD to 3,000AD, a computer model based on the IPCC A2 scenario was used. This scenario assumes a complete cessation of carbon dioxide emissions in 2100. More details on the model used can be found here. In this part of the simulation the time steps change from a frame every 500 years as used in the first part of the animation, to a frame every 50 years to show the rapid changes that are modeled. The northern ice cap quickly disappears and the ice on Greenland and Antarctica begins to melt steadily. By the year 3,000AD, there is predicted 6m (19ft) sea level rise. The simulation continues from 3,000AD to 10,000 AD in 500 year time steps in a fictional scenario of worldwide glacier meltdown and shows the impacts this would have on the coasts.

The Zurich University of Applied Sciences has also made this animation available for Google Earth: