Kemp's ridley 94-7295 ( Gulf of Mexico Turtle 94-7295) was tracked from Cameron, Louisiana to Rancho Nuevo, Tamaulipas, Mexico by satellite telemetry for 287 days from 13 August 1994 through 16 May 1995. It moved offshore of the upper Texas coast in late November 1994 and traveled south along the Texas coast into Mexican waters through early January 1995. It was offshore of the Rancho Nuevo nesting beach by 10 March 1995. It moved an additional 100 km to the south before returning to nest on 23 April 1995, and again on 19 May 1995; both nestings were recorded by Rancho Nuevo workers. This is the first time a Kemp's ridley has been remotely tracked to a nesting beach. The satellite transmitter was in its non-transmit mode during the first nesting, and was no longer functional during the second nesting, the last transmission was recorded just offshore Rancho Nuevo three days earlier on 16 May 1995. A total of 121 eggs were deposited in the first nest; 103 (85%) successfully hatched on 14 June 1995. One hundred twenty-nine eggs were laid in the second nest; 98 (76%) hatchlings emerged from the nest on 5 July 1995.

Kemp's ridley 94-7293 ( Gulf of Mexico Turtle 94-7293) bore a Mexican flipper tag and had been observed nesting at Rancho Nuevo, Mexico in the previous nesting season. The turtle progressively moved eastward and southward along the Gulf of Mexico coast and was located off of Cape Sable, Florida by early January 1995. It overwintered in this area. Transmissions from the receiver ceased on 30 March 1995. This turtle provides an interesting contrast to Satellite tracked Kemp's ridley 94-7295. Although both turtles were very similar in size and capture location, they exhibited very different behaviors - with 94-7295 migrating to Rancho Nuevo, Mexico, while 94-7293 overwintered in the Florida Keys.

The third sea turtle, subadult Kemp's ridley 95-8002 was captured on 22 August 1995 near the west side of the jetties at Calcasieu Pass near Cameron, Louisiana. The turtle's shell measured 53.8 cm in length and 54.1 cm in width, and weighed 45.2 pounds (20.51 kg). Similarly, the turtle was captured in a 91.5 m turtle entanglement net by Texas A&M University biologists. It was fitted with a Telonics ST-10 satellite transmitter on 22 August 1995 and tracked by NOAA's National Marine Fisheries Service Galveston Laboratory. The turtle progressively moved eastward and southward along the Gulf of Mexico coast and was located off of Cape Sable, Florida by early January 1996. By 3 February 1996, the turtle had crossed from the Gulf of Mexico into the Atlantic Ocean and was located near Boca Raton, Florida. It stayed in this area until early April 1996 when it moved south of the Florida Keys. It remained there until the last transmission was received on 10 November 1996. 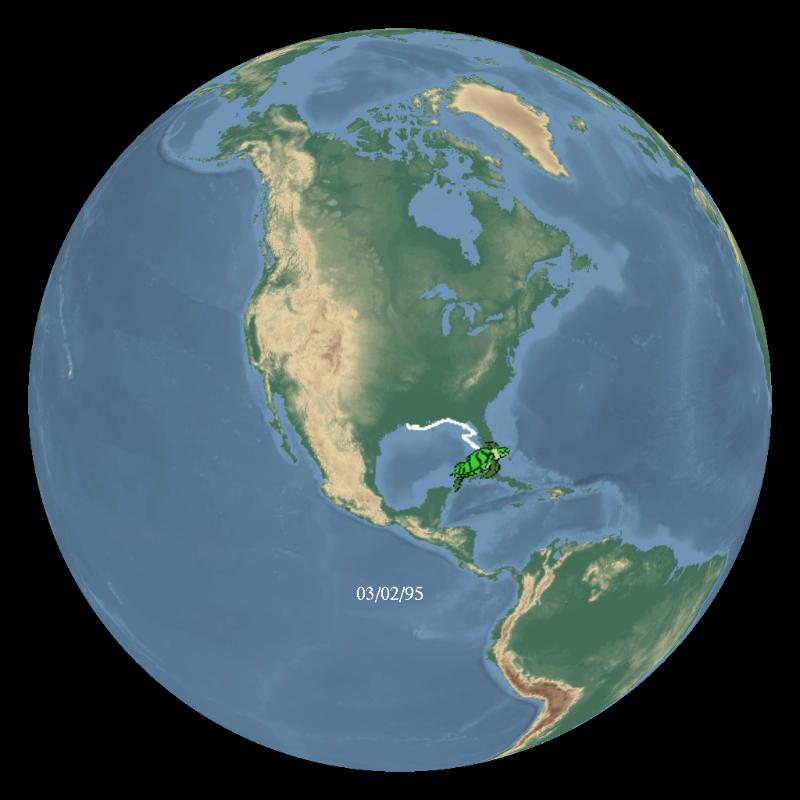