This SOS dataset is a companion to a flat-screen data visualization, Greening of the Arctic, produced by the American Museum of Natural History's Science Bulletins program.

The FTP link will lead you to two movies: One is AMNH's flat-screen visualization. The second - the SOS dataset - adapts this visualization for Science On a Sphere, but without captions.

As global climate warms, plant life responds. In the Arctic, where surface air temperatures have risen at about twice the global rate, scientists are witnessing distinct shifts in where different types of vegetation grow over the last 30 years. Satellite data and field studies show that trees and shrubs are expanding by pushing northward, while the low-to-the-ground tundra plants to their north are shrinking in range. Predictions from climate models suggest that the changes in plant distribution in the Arctic will significantly infuence the global climate system. According to recent research, woody plants could expand by 52 percent in 50 years. Such profound shifts in plant distribution will result in an overall positive feedback to climate that is likely to prod more warming than has previously been predicted.

For more on this finding, see the March 2013 scientific paper in the journal Nature, Shifts in Arctic vegetation and associated feedbacks under climate change, in the FTP folder. 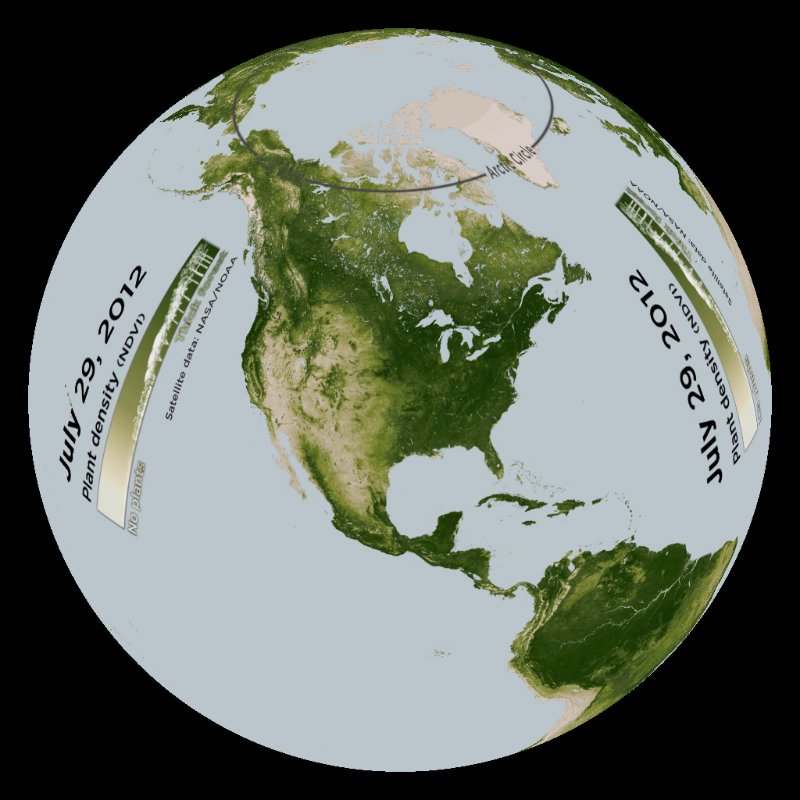 Green: Vegetation on Our Planet (Plant Density [NDVI]): The first dataset in the visualization shows the density of green-leaf vegetation on Earth. The darkest green areas have the most plants, while the pale colors are sparsely vegetated because of snow, drought, rock, or urban development. Scientists use an algorithm called the Normalized Difference Vegetation Index (NDVI) to quantify the global density of plants, which is derived by measuring the wavelengths and intensity of visible and near-infrared light reflected by the land surface back into space. Data acquired from the VIIRS sensor aboard the NASA/NOAA Suomi-NPP satellite from April 8 to August 26, 2013, was used to generate this segment, which highlights the summer "green-up" of vegetation in the Northern Hemisphere. For more information on this dataset, see Green: Vegetation on Our Planet at the NOAA National Environmental Satellite, Data, and Information Service (NESDIS). 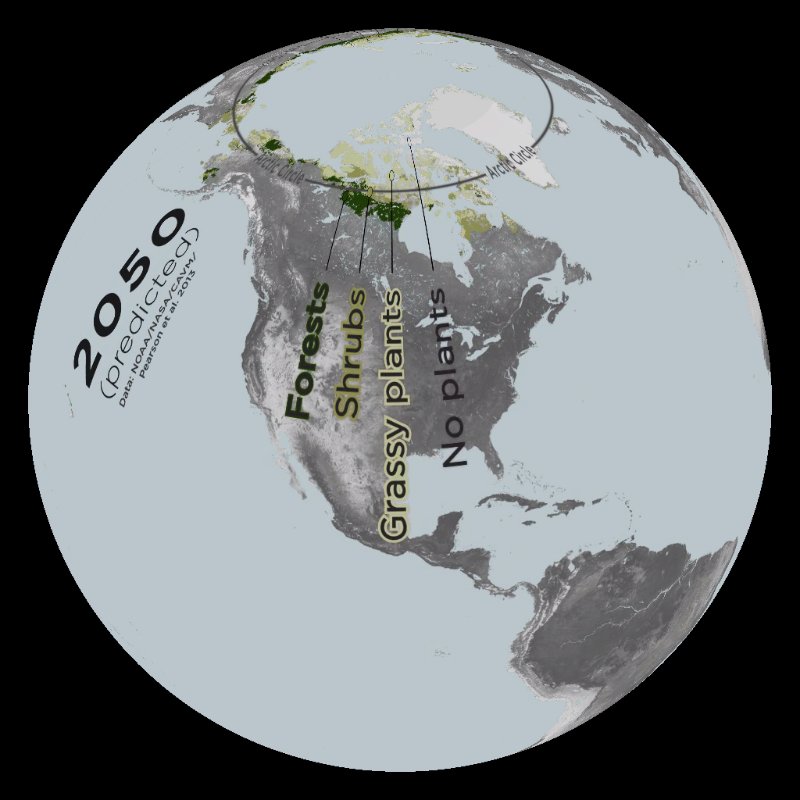 Vegetation Classes: The three colors of green in the next dataset indicate three classes of vegetation in the Arctic region. They include the northern limit of forests (dark green) as well as shrubs (medium green) and low-growing tundra plants such as grasses, sedges, and mosses (light green). This progression of tall, dense vegetation in the south to shorter, sparser vegetation in the north directly relates to the amount of warmth available for growth - the warmer the summer temperatures, the greater the size, abundance, and variety of plants. The classes were modified from those identified by American Museum of Natural History research associate Richard Pearson and his colleagues using data from the Circumpolar Arctic Vegetation Map (CAVM). The CAVM was developed using a variety of data from satellites as well as on-the-ground research.

Summer Greenness, 1982 - 2010: (pictured at top) Satellite images of global vegetation density are available since 1982, allowing scientists to understand where and how the productivity of Earth's vegetation has changed in the last 30 years. This pair of images shows the greenness of vegetation during the periods 1982 to 1986 and 2006 to 2010 compared to the full satellite record period from 1982 to 2010. Like the first dataset in the visualization, these images are based on the Normalized Difference Vegetation Index. At high northern latitudes, vegetation has predominantly become greener (more productive) over time, with productivity being relatively low in 1982 to 2006 (browner colors) and higher in recent years (2006 to 2010, greener colors). These images were produced for this data visualization by Scott Goetz, Pieter Beck, and Kevin Guay at the Woods Hole Research Center.