In order to monitor the fires occurring globally, a special sensor has been mounted on the Terra and Aqua satellites. The sensor, named the Moderate Resolution Imaging Spectroradiometer (MODIS), is able to provide daily satellite images of the Earth's landmasses in near real-time using the MODIS Rapid Response System. There are many uses for the data collected from MODIS, such as monitoring global fires by detecting the abnormally high temperature anomalies at the surface. When a location is much warmer than the surrounding area, it suggests the presence of a fire or a lava flow. It is important to know the size, location and intensity of fires because of the damage that they can cause, and also to help scientists understand the emissions from the fires and their short- and long-term effects on ecosystems.

The fire maps available for Science On a Sphere® display all of the fires accumulated over 10 day periods. Over the course of a year, 37 maps are generated. (The 37th map includes a few days from the following year.) Every fire that occurred over the 10 day period is indicated by a dot. The dots are colored from red to indicate a low fire count through yellow to indicate a high fire count. The location of widespread fires varies through the year with the seasons. Some of the fires are prescribed fires, which are set to prevent really large uncontrollable fires in the future. In the United States, approximately two million acres are burned in prescribed fires every year, with many more million acres burned in wild fires. The years 2000, 2007, and 2009 are available for display. 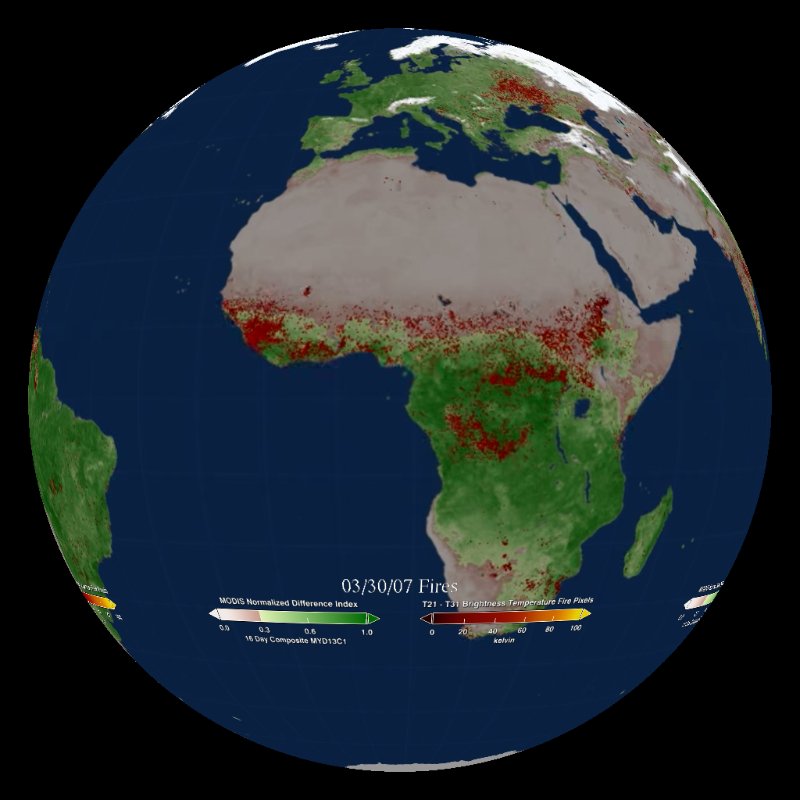