The NOAA SOS Public Kiosk (“NOAA Kiosk”) software, is a new product beginning with the SOS 5.0 release. It provides a touch screen controller intended for a general public audience to interact with a Science On a Sphere® (SOS) exhibit when there is no docent present. It has some similarities with other third party kiosks for SOS such as the Bishop Museum’s kiosk. The motivation for building the NOAA Kiosk was to provide a flexible and easy to administer public controller that can be localized to native languages by using standard SOS playlists. The NOAA Kiosk runs on Microsoft Windows, but was designed to be able to portable to other types of computers such as Linux and Mac OSX (should there be sufficient demand for those platforms). The NOAA Kiosk is fully supported by its NOAA software developers and is included as part of the normal SOS assistance provided at sos.support@noaa.gov. Suggestions for new features and submissions of bug reports is highly encouraged to keep improving the NOAA Kiosk into the future.

The public UI is shown in the following screenshot. 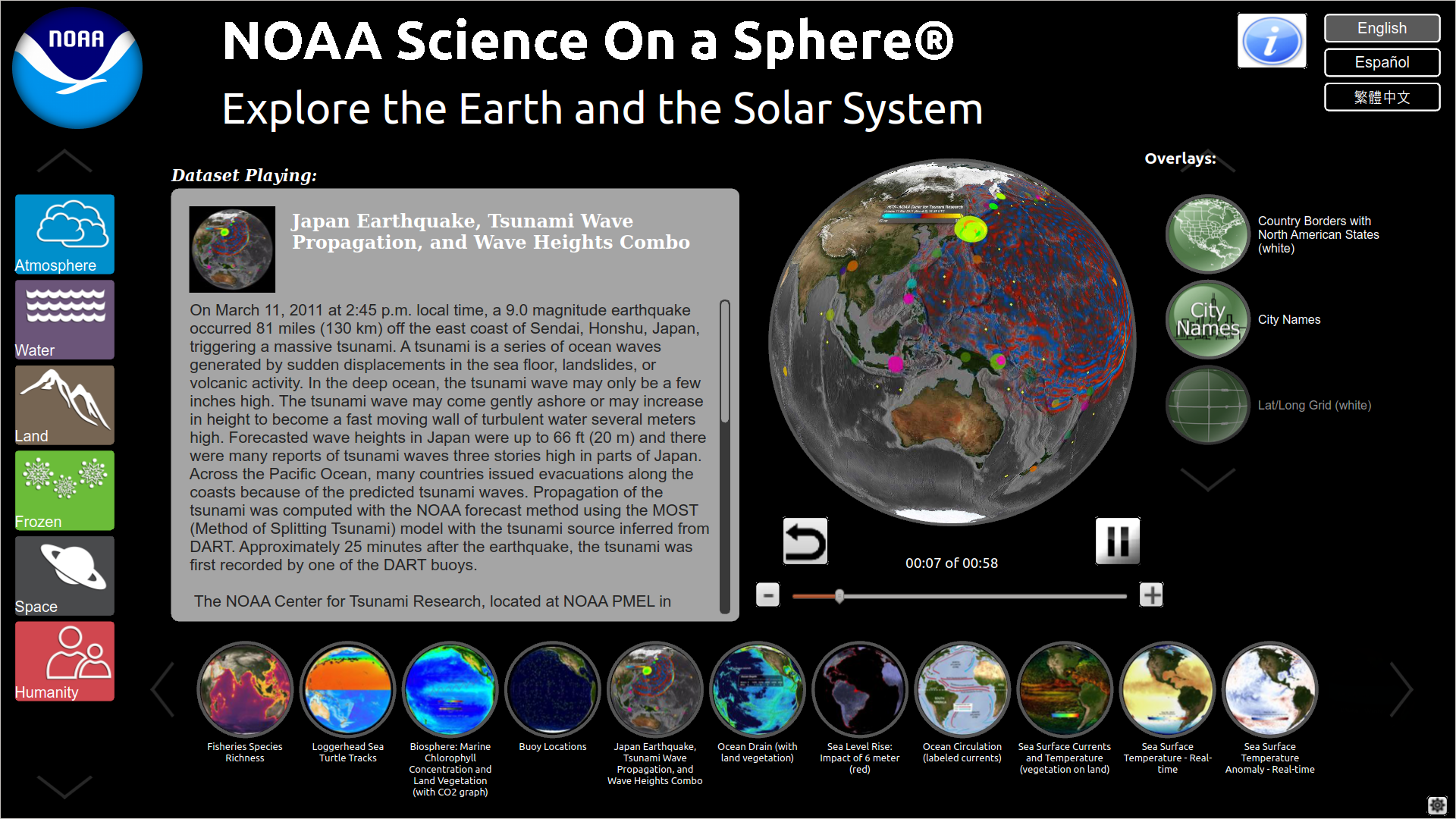 These are the major components of the public UI with their relative locations:

How to Use the Kiosk

This is the basic approach to follow when using the NOAA Kiosk:

Other possible things a user may wish to do:

The NOAA Kiosk software runs on a PC running Microsoft Windows. It is officially supported on Windows 7 and 8, but may also run okay on Windows 10 or XP. The User Interface scales automatically for different screen sizes, including both 4:3 and 16:9 ratios. It requires a touch screen, which can be separate from the computer or in an all-in-one configuration. The touch screen works best when mounted either in a kiosk housing near the sphere or mounted to the railing that surrounds it. The kiosk PC must be on the same network as the SOS machine, either directly connected with ethernet or by Wi-Fi.

For more specific recommendations pertaining to your particular venue, you can contact NOAA SOS support at sos.support@noaa.gov.

The NOAA Kiosk software is available to all current SOS customers at no cost upon request by e-mailing NOAA SOS support at sos.support@noaa.gov. Instructions will be provided on how to download the software, which is provided as a standard Windows setup.exe program that unpacks and installs the software as well as the default configuration files on the PC. Most of the files reside under C:\shared\sos\kiosk and approximately 80MB of disk space is required for the software and datafiles. Once installed, the hostname or IP address of the SOS machine must be set correctly as described in the Administration Options section.

The NOAA Kiosk has default settings that will work well for many SOS sites. There are a number of ways to customize the kiosk to suit the needs of a particular venue:

Each of these of configurations is described in a separate section below. The underlying file structure the NOAA kiosk is fully described for reference in Appendix A.

The NOAA Kiosk is highly configurable using the Admin UI, which is launched by pressing the gear icon in the lower right corner of the Public UI. A numeric keypad appears to enter a 4 digit passcode (the default is 1234, which should be changed!). The Admin UI has three tabs as follows:

Text Settings in the Public UI

The NOAA Kiosk has a few UI settings that are not currently settable using the Admin UI. Most are text files that can be edited (or created) using the standard Windows notepad program. The file naming shown below is required.

The following files are all located in the C:\shared\sos\kiosk\config directory:

The default Groups and Datasets provided with the NOAA Kiosk setup may work well for a venue, but are easily changed to better suit the intended educational purpose. The NOAA Kiosk defines which groups and datasets are displayed by using standard SOS playlists that reside under /shared/sos/kiosk/playlists on the SOS machine. They are used in a hierarchical fashion as follows

Once the group playlists are all edited, they can be tested by loading them in SOS by selecting /shared/sos/kiosk/playlist/kiosk.sos in the SOS Stream GUI and checking to see if there are any errors. The next step is to run the media2kiosk utility, which is located in the bin directory of the SOS installation, in a terminal window. This program automatically generates the file hierarchy used by the kiosk for groups and datasets. This utility will automatically name the groups after the playlist filenames used to define them.

Once the kiosk’s dataset and group file hierarchy is generated by media2kiosk , it is necessary to transfer these files over to the kiosk machine. The kiosk software does not currently do this transfer, but there are a number of alternatives to choose from. Probably the easiest way is to just copy the datasets and groups directories (and their included subdirectories and files) on the SOS machine to an ordinary USB flash drive. Then copy the files from there to the Windows kiosk.

There are also a number of freely available simple FTP utilities that can do the copy electronically. To do this, a simple FTP server is installed on the SOS machine and an FTP client on the Windows kiosk. Appendix B describes how to install the FTP server and client to do the file transfer between the two systems.

Note that by default, the dataset names and descriptions are obtained from the SOS Data Catalog. The descriptions tend to be longer than desirable for a kiosk user, so there is a way to replace those with your own text. This is done with the same approach as for translating English to other languages, which is covered in the next section.

The term localization refers to translating text into another language, with possible variations for a particular country. The NOAA Kiosk uses playlists to define translations for dataset names and descriptions. This follows the approach used more generally in SOS, which is described in the SOS Translations Guide. The same dataset translation playlists can be used for both the Kiosk and SOS Data Catalog, although they are imported in different ways. In the NOAA Kiosk, playlists are also used to translate the names of the Groups.

Translation playlists reside on the SOS machine under the /shared/sos/kiosk/playlists/locale directory. There are subdirectories for datasets and groups, each of which hold a set of playlists following the naming convention xx_YY.sos, where xx is the ISO-639 language code and YY is the ISO-3166 country code. The default locale is en_US, which is English in the United States.

There are default en_US.sos playlists under both the datasets and groups directories. While these are not technically translations, they do provide a way to override both the default names and descriptions of datasets from the SOS data catalog and the autogenerated group names.

Here is a small part of the en_US.sos playlist for datasets:

The playlist keywords required for each dataset are:

Translations to other languages work exactly the same way, except that the values for rename and description will not be in English.

Groups are translated similarly to datasets, except that there is no description. Here is an example of a Traditional Chinese translation for the kiosk groups in groups/zh_TW.sos:

Whenever adding or changing the playlists under the locale subdirectory, the media2kiosk utility must be run again to regenerate the updated file hierarchy used by the kiosk for groups and datasets.

Appendix A: The Kiosk File Structure

This appendix is a reference that describes the underlying file hierarchy used to drive the NOAA Kiosk and its user interface. The kiosk software’s appearance and operations are driven entirely by a local file structure in combination with SOS automation interface commands made from the kiosk to the SOS machine. All media used in the kiosk software is locally resident and set up in advance.

Most of the kiosk files are autogenerated on the SOS machine using the media2kiosk utility found in the bin directory of the SOS software installation. This utility must be run from the command line. There are also some files that must be configured directly on the kiosk.

The files structure described below is relative to the kiosk root directory, which is /shared/sos/kiosk on the SOS machine and C:\shared\sos\kiosk on the kiosk machine.

Directories and files required only on the kiosk machine

These files are edited on the Kiosk and are not used on the SOS machine:

Directories and files required only on the SOS machine

These files are used as input to the media2kiosk utility and are not used on the kiosk:

These files must be transferred to the kiosk machine:

Appendix B: Transferring Files Between the SOS Machine and NOAA Kiosk

File transfer between the SOS machine and the kiosk is not trivial since these two machines use very different operating systems, Ubuntu Linux and Microsoft Windows, respectively. The kiosk software does not currently support a direct transfer between the two systems, but there are freely available third-party solutions that accomplish this task very well.

An easy way to set up file transfers between these two systems is by installing File Transfer Protocol (FTP) software. On the SOS machine, the very secure FTP daemon (vsftpd) server can be installed using the normal Ubuntu apt-get commands and by editing a few configuration files. On the Windows kiosk, two alternatives that have been downloaded, ins tested successfully are the FireFTP plugin for the Firefox web browser and the FileZilla FTP client utility.

First, do an update and install the FTP server software:

Next, make the following edits to the FTP configuration file:

Then, edit or create the following FTP users file:

Lastly, start up the FTP server:

If the Firefox web browser is not already installed on the kiosk, you can obtain it from www.mozilla.org/firefox. Once Firefox is installed, on the menubar, select Tools > Add-ons > Get Add-ons. Search for FireFTP, locate it in the search results, and click on Install.

Here is a screenshot of FireFTP when connected to an Ubuntu machine (in this example called “cobalt”) running SOS and the vsftpd server: 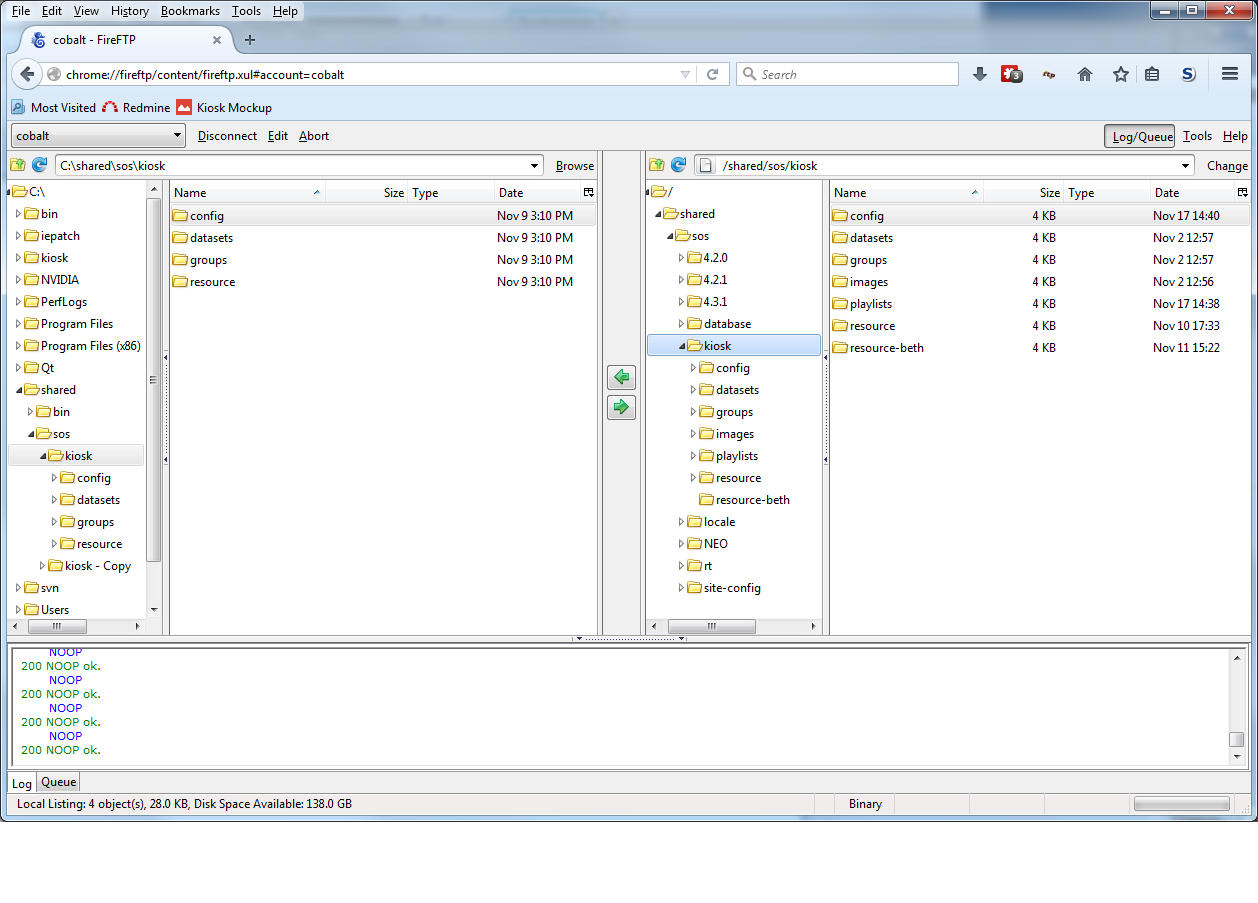 Here is a screenshot of FileZilla when connected to an Ubuntu machine (in this example called “cobalt”) running SOS and the vsftpd server: 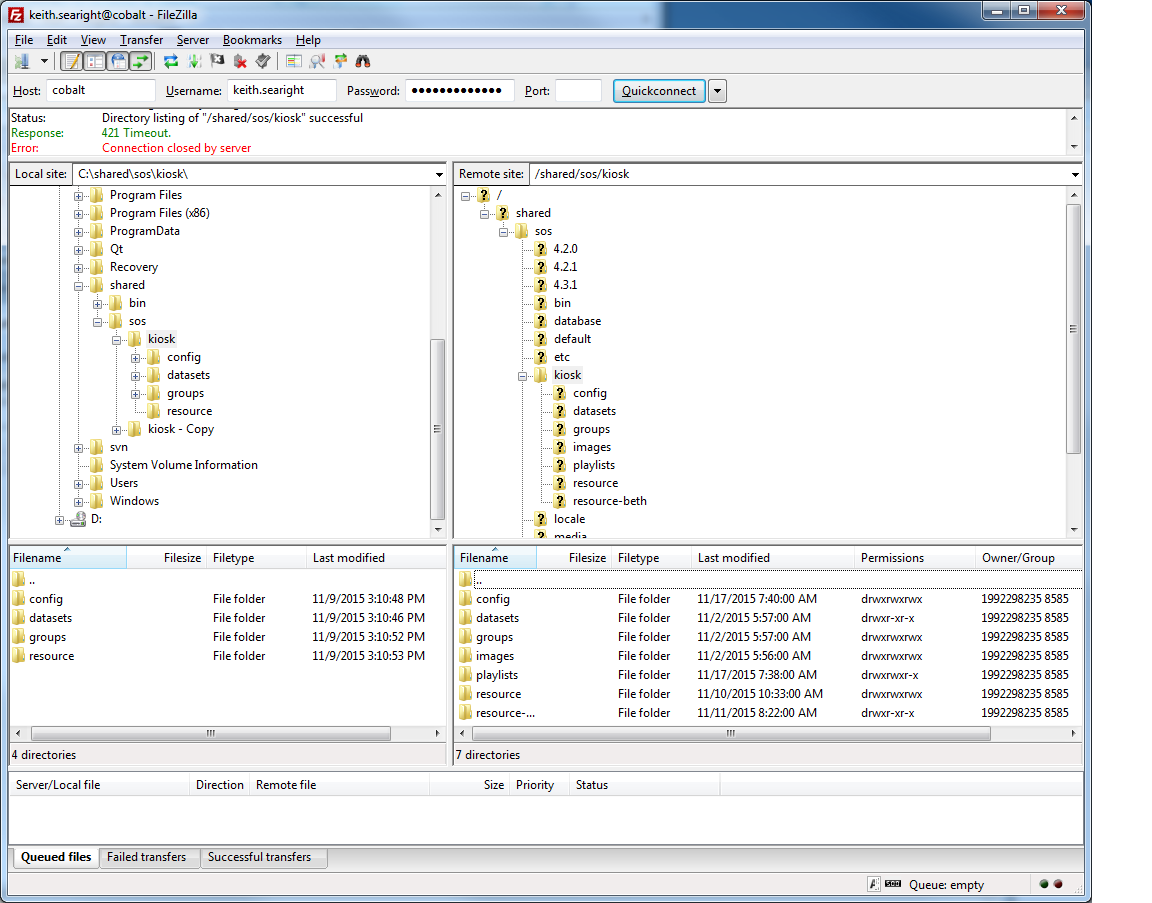 Using the FTP client of your choice on Windows, you will need to transfer the datasets and groups subdirectories (and their contents) under /shared/sos/kiosk on the FTP server (the SOS machine host) to the C:\shared\sos\kiosk\ folder on the FTP client (the Kiosk machine), replacing or adding to the files already there.

You can immediately use the updated dataset and group files by restarting the kiosk software.